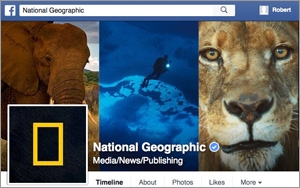 Consumer magazines saw their total social media audience increase by over a third last year, adding around 220 million new likes and followers across major platforms including Facebook, Twitter, Instagram, Google+ and Pinterest, according to data provided by SocialFlow and cited by the MPA – The Association of Magazine Media.

That’s a 38% increase over the beginning of the year. The fastest-growing social platform was Instagram, with a 189% increase in magazines’ followings over the course of the year.

National Geographic led the way with 100 million likes and followers across the major social platforms at the end of the year, followed by ESPN The Magazine with 50 million, Time with 28.5 million, and The Economist with 28.4 million.

As far as the most popular posts, NatGeo’s coverage of one particular event, the “Super Moon” on September 28 – generated 2.9 million likes and 28,000 comments across three Instagram posts devoted to the event. NatGeo also had the top Facebook post, with a photo of the Eiffel Tower after the terrorist attacks in November, generating 1.2 million likes.

Good Housekeeping came in second place on Facebook, also with a post showing the Eiffel tower after the terrorist attack. Teen title J-14 was the most popular on Twitter, with a tweet about One Direction’s Liam Payne.