The Juice Is Loose: FX Makes A Great Miniseries About O.J. 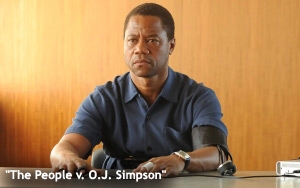 It is no easy feat to generate suspense in a story whose ending is already so well-known.

That’s the case with the great moments in the O.J. Simpson case -- most notably the infamous white Bronco chase in June 1994 in which L.A. police sought to arrest Simpson for the murders of his estranged wife, Nicole Brown Simpson, and her friend, Ron Goldman; and Simpson’s stunning acquittal on those charges a year-and-a-half later.

Anyone who was alive then knows what happened. But this new limited series on FX called “The People v. O.J. Simpson” is so well-made that it enables you to relive the Simpson years as if you are experiencing them for the first time.

This ten-part series is the first installment of an umbrella series subtitled “American Crime Story.” A second series is reportedly in the works for next year about Hurricane Katrina.

In “The People v. O.J. Simpson,” the Bronco chase is the centerpiece of the second episode. The first episode Tuesday night starts with the discovery of the bodies of Nicole Brown Simpson and Goldman on June 12, 1994, and ends just as O.J. and his friend, Al Cowlings, have escaped out of the back door of a friend’s house (Robert Kardashian’s), evading O.J.’s arrest and inaugurating the drama of the white Bronco, which dominated TV screens and riveted the nation’s attention for much of the day and into the night on June 17.

Other luminaries such as F. Lee Bailey, Alan Dershowitz, Barry Scheck, Lance Ito and others are introduced in later episodes.

As TV productions go, this one boasts a top-flight cast and the casting has to rank high on the list of reasons this miniseries is so effective. Among the standouts (which is not to condemn the others to any kind of second-rate standing here) are Travolta as Shapiro, Vance as Cochran, Paulson as Clark, and Schwimmer as Kardashian.

In his portrayal of the egotistical, celebrity-conscious Shapiro, Travolta seems to be using everything he has absorbed and learned about the characteristics of outsized Hollywood personalities in a lifetime spent in the movie business. He is sensational. Vance’s portrayal of Cochran is a flat-out, dead-on impersonation that might be the best performance in the whole show.

Of the entire cast, it is Cuba Gooding Jr. as O.J. who takes the longest to get used to. In the first two episodes -- culminating finally in O.J. being taken into custody after the Bronco chase -- Gooding plays him rightfully as an emotional wreck. He is a man who tearfully claims to be in shock over the brutal death of his ex-wife, who he proclaims constantly to still be in love with. He continually proclaims his innocence in her murder -- as if he is trying to convince himself of this as much as anyone else.

At the same time, you get the feeling he’s engaged in an almost-constant process inside his head of building a defense strategy based on fabricated timelines and questionable alibis. Gooding is particularly effective when O.J. and Cowlings are on the run, and O.J. is holding a gun to his own head threatening to commit suicide.

However, if there is a weakness in Gooding’s casting as O.J., it is in their physical dissimilarities -- which is not a trivial thing when it comes to playing an athlete as renowned as Simpson. Gooding is three inches shorter than O.J. and he has a slighter build as well. More notably, Gooding’s voice is higher and in the movie, it is high and raspy.

O.J.’s baritone voice was well-known because of his work as a sportscaster, actor and commercial spokesman. When you listen to Gooding speaking as O.J., in a voice that is wholly unfamiliar to all of us who knew O.J.’s voice, it becomes difficult -- especially at first -- to accept Gooding in the role.

But these reservations are trivial. By the time the Bronco chase is in full flower, you will likely be hooked.

tv
1 comment about "The Juice Is Loose: FX Makes A Great Miniseries About O.J.".
Check to receive email when comments are posted.
Next story loading