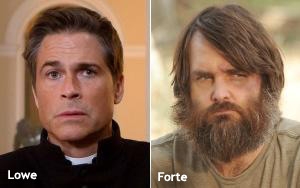 Television is facing the end of the world by laughing at it.

OK -- so it might not qualify as a full-blown trend under the “official” rules which dictate that an authentic trend requires three of something, rather than just two. But perhaps we can make an exception for these two prime-time comedies about the apocalypse --  “You, Me & The Apocalypse” on NBC and “The Last Man on Earth” on Fox.

“You, Me & The Apocalypse” has been airing since Jan. 28 on NBC, although you can be forgiven for not knowing this because it seems to have garnered almost no attention.

It’s a one-hour show, but classified here as a comedy because of the lighthearted way in which it deals with the end of all life on the planet Earth. Among its stars are Rob Lowe (playing a priest), Megan Mullally and Jenna Fischer -- the latter two playing convicts who escape from prison in the mayhem following the news that Earth will be struck imminently by a large asteroid that will destroy everything and everyone.

In fact, Rob Lowe is so omnipresent on TV -- also starring currently in “The Grinder” on Fox -- that he might have you believing that in the event of a real-life apocalypse, he will actually emerge as the last man on earth.

However, when it comes to prime-time comedy, the last man on Earth is Will Forte, star of the half-hour sitcom “The Last Man on Earth” on Fox. This series is now in the midst of a midseason hiatus, having wound up the first half of its current season in December, Sunday nights on Fox.

While “You, Me & The Apocalypse” deals with the turmoil in the days preceding a worldwide, life-ending catastrophe, “The Last Man on Earth” started out (when it premiered last March) one year after a global pandemic supposedly killed every human being except for the man played by Forte.

Soon, though, it became apparent that he was not the last man or human on earth because that would have made for a difficult show to pull off. So, this last man on earth has attracted a handful of others who have now formed the nucleus of a tiny community of survivors living in Arizona. Survival is surprisingly easy too, thanks to the abundance of empty homes, packaged foods and all sorts of necessities and luxuries that can be found in abandoned shopping centers and malls.

In some ways, this show seems to be saying: If you can survive a global apocalypse, life doesn’t really have to be all that difficult. Of course, that’s a different perspective than the post-apocalyptic world that’s been presented over the years in movies and TV shows. For example, “The Walking Dead” finds its human protagonists struggling to survive during an apocalypse -- as opposed to the days or weeks preceding it, or the years after it subsides. Their struggle is stressful indeed.

In the “Mad Max” movies, the post-apocalyptic world is depicted as a series of life-and-death battles over dwindling resources. That runs counter to “The Last Man on Earth,” in which supplies and resources are not a problem at all.

If anything, the principal challenge presented by this sitcom is: Now that one has nothing but time, plenty of everything and no need to work, what do you do now?

As for “You, Me & The Apocalypse,” none of the characters seem particularly concerned about the coming disaster. In fact, as symbolized by the escaped convicts, the prospect of a global apocalypse provides everybody in the show with a level of freedom they never before experienced -- equating apocalypse with an exhilarating sense of absolute freedom.

In any case, they certainly have more fun than the people in “Mad Max.”

“You, Me & The Apocalypse” airs Thursday nights at 8 Eastern on NBC.