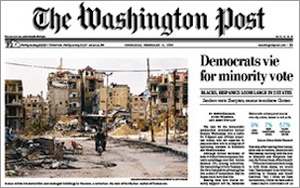 The Washington Post is introducing a new way to raise engagement by readers who have its mobile Web site open but aren’t currently active.

It delivers customized suggestions for other content that may be of interest to the reader.

The new product, called “Re-Engage,” superimposes a blue, transparent box with several links to recommended content over the page. When the user stops interacting or swipes rapidly past content, that suggests they’re no longer interested in that category or not finding what they want.

The content recommendations are produced by WaPo’s Clavis personalization system, which identifies audience segments among WaPo readers based on their interests. It also draw on the newspaper’s Bandito testing system, which optimizes content by determining the most popular headlines and images based on reader activity.

WaPo is also planning to introduce advertising support for “Re-Engage,” according to the blog post announcing the new product. “While ‘Re-Engage’ is a product created by the business side, because it gives us information about user behavior, the newsroom will release it on various sections for a/b testing and performance. ‘Re-Engage’ will then be available for sponsorships and branded content promotion.”

Back in December, WaPo’s tech innovation lab, called RED, unveiled a new native advertising format, PostPulse, that incorporates editorial content from the newspaper, allowing advertisers to recommend relevant content elsewhere on the WaPo Web site, based on the context of the article the reader is currently viewing. PostPulse also uses Clavis.

FlexPlay, takes a short clip from an advertiser’s video ad, five to 10 seconds in length, and converts it into a GIF and mp4 file formats. It loads virtually instantly, regardless of device, so ads begin playing immediately on smartphones, tablets and desktop.