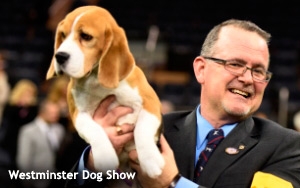 It’s the end of an era as USA Network prepares to say good-bye to the Westminster Dog Show after 32 years.

USA has aired this annual rite of February, live from Madison Square Garden, since 1984. Next year, it moves to Fox Sports -- specifically the Fox sports channel known as Fox Sports 1 -- under a 10-year rights deal announced last July. Fox Sports 1 will share coverage of the Westminster show with co-owned Nat Geo Wild.

This year’s “Westminster Kennel Club Dog Show” -- the 140th -- airs, as always, over two nights for all three hours of prime time (8-11 p.m. Eastern) on NBC-owned CNBC next Monday and USA on Tuesday. The second night, of course, encompasses the dramatic crowning of the Best in Show just before 11 o’clock -- a moment of glory celebrated with much tail-wagging and face-licking. And the winning pooch always seems happy too.

The first night is on CNBC because “WWE Monday Night Raw” takes up the three hours of prime time on USA Network on Monday night, and heaven forbid USA preempts wrestling.

But give USA and NBC credit for sticking with this annual event for so long. They made it one of the most anticipated TV events of the year and one of the year’s great TV pleasures. And that includes the commercials too.

Last July’s announcement from Fox about the 10-year rights deal did not reveal what Fox offered the Kennel Club to wrestle this event away from USA. As for USA, the network has been shedding sports events (such as U.S. Open tennis, for example, which reverted to ESPN in 2009), so it’s possible it sought to shed the Dog Show as well.

However, when questioned about the Westminster Show, a USA spokesperson was quick to point out that NBC still airs another annual dog show in prime time on or around Thanksgiving -- the “National Dog Show” put on by the Kennel Club of Philadelphia and telecast live from Philly.

Westminster has the higher profile, though. In addition to the six hours of prime-time exposure it gets every year, the event is widely covered both before and after it takes place. With the winner being announced just before 11 p.m. Eastern, the story is a staple on late local newscasts, which tend to report on the winner just minutes after the crowning.

The next day, it has become traditional for the winning dog -- such as last year’s winner, a four year-old beagle named Miss P (seen in the photo above) -- to make the rounds of the morning TV shows in New York and, later, the late-night shows, while photos and stories about the winner are seen on newspaper front pages from coast to coast.

It’s the kind of hoopla that many humans would kill for, which raises a question: With broadcast TV seemingly in the hunt for live-event programming, why would NBC let the Westminster Dog Show get away? If it aired on NBC, I’ll bet it would do at least as well as most of the network’s shows, if not better.