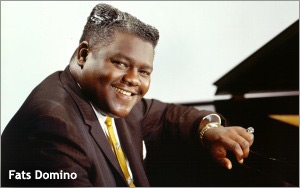 The thing I love best about these occasional documentaries about the early days of rock ’n’ roll -- such as this week’s “American Masters” on Fats Domino -- is the role that television plays in each and every one of them.

From countless previous documentaries, most people are familiar with the early TV appearances of Elvis Presley in 1956, for example -- the Dorsey brothers “Stage Show” (Jan. 28), “The Milton Berle Show” (April 3), “The Steve Allen Show” (July 1) and “Ed Sullivan” (Sept. 9 and Oct. 28).

The footage never ceases to fascinate. It’s always in black-and-white, of course, and always in various states of distortion too, due to the primitive “kinescope” method by which the footage was preserved. As I understand it, the kinescope process involved positioning a movie camera directly in front of a TV screen during a live TV show, and voila, that’s how you “recorded” a TV show 60 years ago in the 1950s. It all seems so ancient now, doesn’t it?

In this new installment of “American Masters” -- subtitled “The Big Beat: Fats Domino and the Birth of Rock ’n’ Roll,” premiering Friday night on PBS -- Fats is seen on three national TV shows: “Ed Sullivan” in 1956 and “Steve Allen” and “The Perry Como Show” in 1957.

These appearances demonstrate how TV -- the new, national medium that had taken the 1950s by storm -- was embracing the new music that was also sweeping the country. Has anyone actually studied the impact of television on the early success of rock ’n’ roll? Sounds like a great book idea to me.

This Fats Domino documentary traces the story of Domino (real name: Antoine) from his roots in New Orleans and the development of his talent for playing piano to his collaborations with local musicians and, eventually, his success as a crossover artist in the early days of rock ’n’ roll with hits such as “Ain’t That a Shame” and “Blueberry Hill.”

The documentary raises the usual questions of who “invented” rock ’n’ roll and, as is customary for these things, presents no clear answer. The documentary -- narrated by actor Clarke Peters of HBO’s New Orleans drama series “Treme” -- notes that Presley himself referred to Fats as “the king of rock ’n’ roll.” Domino’s influence on others -- especially the Beatles -- is emphasized as well.

Disc jockey and impresario Alan Freed is given credit for coining the phrase “rock ’n’ roll,” of course. And like Sam Phillips of Sun Studios in Memphis, another white entrepreneur, Lew Chudd of Imperial Records, is credited with “discovering” Fats and supervising his early recordings.

The show makes the point that in 1956, Domino was arguably rock ’n’ roll’s biggest star. He released nine hits and then toured the country that year and into 1957. Riots broke out at his shows at least four times, according to this documentary. One historian in the film blames the riots on a combination of alcohol and racial integration (since black and white teenagers apparently flocked to Fats’ concerts), but this historian’s theory comes across as vague.

One fact the documentary makes clear: It took only one week following the release of Fats’ version of “Ain’t That a Shame” for Pat Boone to release his version for white audiences. One week.

Also seen in this documentary: Footage of boogie-woogie piano legend Amos Milburn performing on the original “Showtime at the Apollo” TV show of the 1950s. It’s one of the highlights of the hour, along with another performance from the 1950s -- Fats and his band closing a show with their traditional playing of “When the Saints Go Marching In.” Appropriately, this performance plays at the conclusion of the documentary too.

With this documentary, “American Masters” and PBS are saying happy birthday to Fats, who will be 88 on the day this show premieres, Friday, Feb. 26.