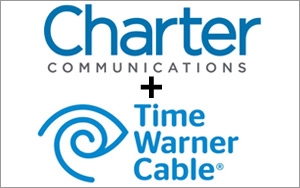 “The Board is satisfied that its approval of this merger will afford customers with improved customer service and access to increased broadband speeds,” Richard S. Mroz, president of the New Jersey Board of Public Utilities, said in a statement issued Wednesday.

The company is seeking to acquire Time Warner Cable and Bright House Networks in a deal valued at an estimated $89 billion.

Charter, which previously secured approval from New York state regulators, is still awaiting decisions from regulators in California, as well as federal officials with the Department of Justice and Federal Communications Commission.

Merger opponents say the deal would leave two companies -- Charter and Comcast -- in control of at least 70% of Web connections at speeds greater than 25 Mbps, which is the FCC's new definition of broadband. Opponents, including Dish, Public Knowledge, Consumers Union, the Writers Guild of America, East and Writers Guild, West, have warned regulators that the post-merger Charter "could limit consumer access to a stand-alone broadband service, or raise the price of stand-alone broadband in a way that favors its own bundle of services."

Charter has promised regulators that it will follow some of the net neutrality rules for at least three years as a merger condition, even if the regulations are vacated in court. The company also promised that it won't cap broadband data, or charge customers based on their data consumption, for at least three years. In addition, Charter said it won't charge content companies like Netflix extra fees to interconnect directly with Charter's servers.

In New Jersey, where Time Warner currently serves around 30,000 residents, regulators are requiring Charter to offer low-income households $14.99 broadband at speeds of at least 30 Mbps downstream, as a condition of the deal. State authorities also say Charter must invest at least $750,000 in customer service improvements, among other conditions.

Separately, New York City's Joshua Breitbart, special advisor for broadband in the mayor's office, recently asked the FCC to require Charter to "invest in their network sufficient to maintain a state of the art system" as a merger condition.