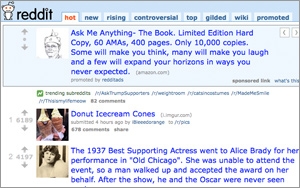 While Reddit remains a relatively niche social content platform -- used by a modest 7% of U.S. adults -- its users are highly engaged and turn to the site for news of all kinds, including politics.

That’s according to the results of a new survey of Reddit users conducted by Pew Research Center, which highlights the site’s importance as a political barometer in the 2016 presidential race.

Overall, 78% of Reddit users say they get news from the site, with 45% saying they learn about the presidential campaign from the site in any given week. That finding echoes the number of Facebook and Twitter users who get political news and information from those social networks, at 52% and 43%, respectively.

As Reddit users skew young, male, and liberal, the site is especially important for Democratic politicians hoping to reach out to young voters. In 2012, President Obama conducted an “Ask Me Anything” Q&A session on the site in August 2012, which attracted over 20,000 comments.

On that note, discussion among Reddit users seems to have forecast early interest in Democratic challenger Bernie Sanders, whose success has since proved an unexpected challenge to establishment choice Hillary Clinton. In the months leading up to the first presidential debates in fall 2015, Sanders was mentioned 165,000 in comments on Reddit, compared to 85,000 for Clinton and 73,000 for Donald Trump.

Reddit has also proven a popular place for Sanders supporters to organize, with the subreddit SandersForPresident generating over 200,000 comments in the three-month-long study period.

However, it’s worth noting that these figures represent a small proportion of the overall activity on Reddit, with 350,000 comments mentioning a presidential candidate in the three-month study period, constituting less than 1% of the more than 165 million comments left on the site during the period.

Pew also noted that Reddit sends a considerable amount of traffic to external publishers, with fully 62% of posts studied linking to another Web site.

news, online publishing, politics, web sites
1 comment about "Most Reddit Users Get News From Site".
Check to receive email when comments are posted.
Next story loading