Is The Sharing Economy Getting Its Share Of Multicultural Consumers?

The sharing economy is booming. Some of the most highly valued tech companies in the past decade have been spawned from this new economic model, tapping into the collective for services rather than a single entity. With sky rocketing valuations comes tremendous pressure to consistently increase revenue for investors in order to set themselves up for an eventual IPO.

The two darlings of the sharing economy boom have been Uber and Airbnb. Both have recently updated their branding (Uber with a bit more of a backlash) in an effort to appeal to a wider audience. Both companies have been facing legal battles across the country and internationally as cities contemplate how their business models disrupt incumbent operators and yet they power on as the sharing economy model hinges on massive growth in order to generate profits.

As the companies continue to grow, we wondered, is the sharing economy getting its share of multicultural consumers? Is this a potentially untapped growth potential?

We asked a representative sample of U.S. Hispanics, African-Americans, Asians, and non-Hispanic whites several questions regarding the sharing economy.

Taking a look at Airbnb first, we just wanted to know if they had heard of it. Interestingly, Asians top the awareness scale of Airbnb, with 50% of them having heard of it. Non-Hispanic Whites trail slightly at 43% but the big dip in awareness comes among the two largest minority groups, with only 29% of Hispanics having heard of Airbnb and 31% of African-Americans. 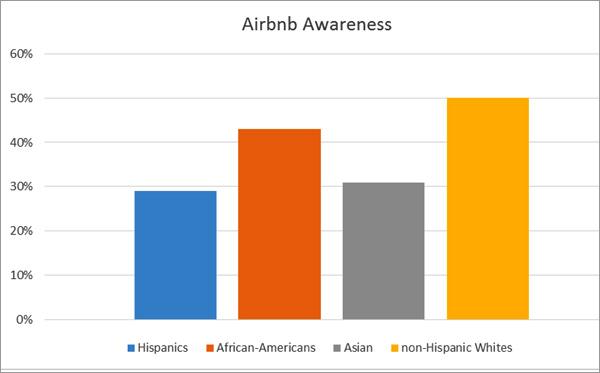 This is particularly troubling for Airbnb as Hispanics and African-Americans combined make up over 30% of the U.S. population. Furthermore, Hispanics are super travelers; taking more trips on average per year than any other cohort and spending more per trip as they are more likely to travel with children. Airbnb would be a great alternative to mid-scale hotels as many offer the amenities of home, which can be critical for travelers with children.

Digging deeper into awareness of Airbnb among Hispanics, we see that the lack of awareness is being driven by the less-acculturated Hispanic: 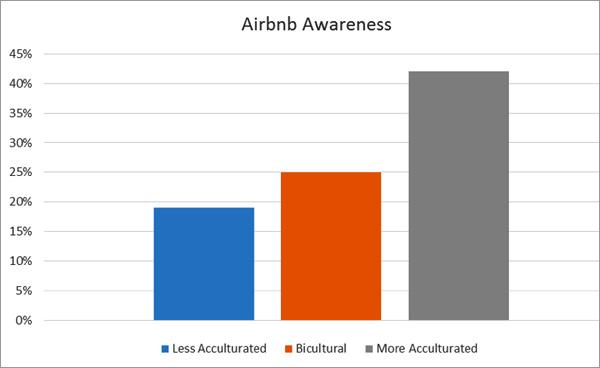 Airbnb is leaving a large opportunity on the table here as recent travel research points to the less-acculturated traveling more often than their more-acculturated counterparts, having larger party sizes, and more likely to travel internationally, specifically in Latin America, where Airbnb is dedicating significant resources towards growth .

Uber, on the other hand, is doing quite well across the board. Looking at past 12-month usage among Hispanics, African-Americans, Asians and non-Hispanic whites, we see a pretty consistent usage rate across all four ethnic groups: 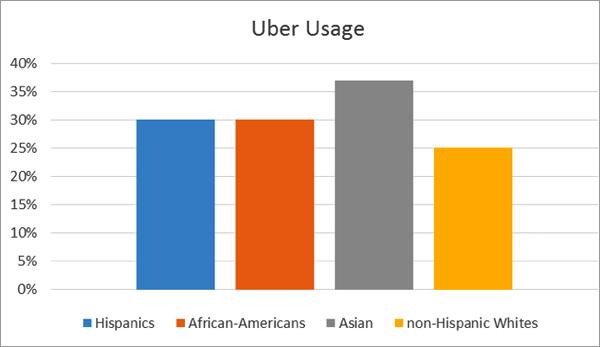 Asians report being the highest users of Uber with almost 40% having used the ride-hailing service in the past 12 months. Hispanics and African-Americans tie at 30% having used Uber in the past 12 months with non-Hispanic whites not far behind at 25%. We were surprised to find that non-Hispanic White usage was lower than other groups. This appears to be a function of age. Younger consumers are more likely to have used Uber, and multicultural consumers are considerably younger than non-Hispanic Whites. Young White Millennials are, in fact, avid Uber users; there are just fewer of them proportionally within their racial group.

A quick comparison of how Uber’s and Airbnb’s platforms deal with multi-language interface may hint at why Uber is doing a better job at capturing the bicultural and less acculturated Hispanic than Airbnb. Uber has two Spanish options, one for Spain and one for Latin America. Key terminology such as coche is replaced with auto in the LatAm version, for example. Airbnb, on the other hand, has only one Spanish option (Spain), which shows a clear disconnect between Spanish speakers from LatAm that comprise the majority of U.S. Hispanics. While this is a relatively minor error on Airbnb’s end, it does highlight Uber’s better understanding of the multicultural market, which is reflected in its high awareness across all cohorts.

2 comments about "Is The Sharing Economy Getting Its Share Of Multicultural Consumers?".
Check to receive email when comments are posted.
Read more comments >
Next story loading