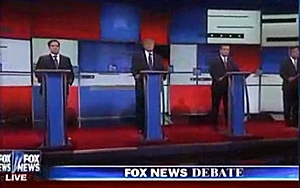 The latest Republican Presidential debate on Fox News grew by double-digit percentages versus the most recent candidate talkfest in February -- making it the fourth-highest of 11 GOP debates to date.

The Fox News debate bested all broadcast and cable programming on Thursday night: CBS earned 10 million viewers for a repeat episode of “Big Bang Theory” and Fox’s “American Idol” took in 8.7 million viewers. CBS’s two other comedies were next: “Life in Pieces” scored 8.4 million and “Mom” had 8.0 million.

The 11 GOP debates have an average 15.8 million viewers, with three debates airing on Fox News; three on CNN; two on Fox Business News; one on CBS; one on ABC; one on CNBC; and one on Telemundo (shared with CNN in February).