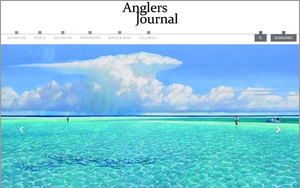 Active Interest Media (AIM) has announced the creation of a new fishing TV show to complement its launch of Anglers Journal magazine.

“Anglers Journal Television” (“AJTV”), will be produced by Warren Miller Entertainment and AIM Studios of Boulder, Colorado, both subsidiaries of AIM.

“Anglers Journal demonstrates AIM’s philosophy that a premium print product at the core of a media brand is essential,” stated Andy Clurman, CEO and president of AIM.

He added that the effort will allow AIM to “scale our footprint in the fishing category."

John Brownlee will serve as host and executive producer of the new series, showcasing the places, people and fishing found throughout the coastal U.S. and several international destinations. The show will also highlight gear used in the sport.

Production of “AJTV” began in January 2016 and the show will debut at the end of July, running through December of next year.
magazines, sports, tv
Next story loading