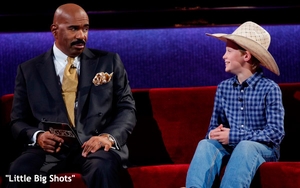 Every once in a while, a TV personality comes along whose energy and workload seem to stagger the imagination.

Ryan Seacrest -- host of “American Idol,” radio personality and mega-producer of reality TV shows such as “Keeping Up With the Kardashians” -- is one of these. Steve Harvey is another.

When you ponder all the activities these people are engaged in at any one time, you wonder how there are enough hours in a day to accommodate them. It’s possible that for an entertainer like Harvey, the piling on of jobs is the result of years of doing without them.

People who have been in show business a long time will tell you that when opportunities come knocking, they are not to be taken lightly or refused, if humanly possible. They are conditioned to say yes, because they have learned that opportunities can disappear as quickly as they appear (if not quicker).

At age 59, Harvey is literally all over the place. He tapes a daily afternoon talk show in Chicago; travels to Atlanta every couple of weeks (or months) to tape multiple episodes of “Family Feud,” which he hosts; hosts a national morning radio show from wherever he happens to be; maintains a production office in Los Angeles (under a production deal with Endemol Shine North America); and most recently has been in that city taping his new child-talent show “Little Big Shots” for NBC.

It has been on exactly twice, and emerged almost immediately as this season’s brightest success story. In its debut on NBC March 8 following “The Voice,” “Little Big Shots” drew 12.81 million viewers and scored a 2.9 rating in the demo (18-49). And that was at 10 p.m. Eastern when families are less likely to be watching TV together.

The following Sunday night, the show premiered in its regular time period at 8 p.m. Eastern and drew an audience of 15 million and a 2.8 in the demo. It was the highest-rated show on network TV by far on Sunday night. Big surprise: It has already been renewed for Season Two.

“Little Big Shots” succeeds because it’s based on a tried-and-true formula -- namely, kids saying the darnedest things and Harvey reacting to them. And then the kids perform incredible feats such as playing musical instruments like virtuosos, or trouncing Harvey in a spelling competition (not that Harvey is necessarily known for his spelling prowess). It is a sensational show -- co-produced and co-created by Harvey and Ellen DeGeneres.

So why has Harvey said yes to so many well-paying jobs at once? Because he can. Seeking insights into Harvey’s mindset, I went in search of interviews with him and my favorite one was his encounter (not really an interview) with Jerry Seinfeld last May. Harvey taped an episode of Seinfeld’s Crackle series “Comedians In Cars Getting Coffee” and Seinfeld appeared on Harvey’s talk show the next day.

At one point, as the two were driving around Chicago in a vintage Chevy Bel Air from the 1950s, Seinfeld asked Harvey whether he was afraid of becoming overexposed.

He also said something revealing about the nature of entertaining people for a living. The best ones make it look fun, and at times, even easy. But in his conversation with Seinfeld, Harvey indicated that it’s not so easy to keep on smiling.

“In about five years, I’m gonna cut all this smilin’ and stuff out,” Harvey said.

To which Seinfeld replied knowingly: “That takes a certain amount of money. There’s a number ...”

He even acknowledged the fact that any one of his gigs would be enough money for anyone. “I tell my wife and my kids [he has seven children from three marriages], ‘I ain’t doin’ this for me. I make enough money on any one of my jobs. You all are creating the logjam!’ I’m giggin’ for them, man. That’s all it is.”