Debate Over Media's 'Unfair' Attention To Trump Is Hogwash 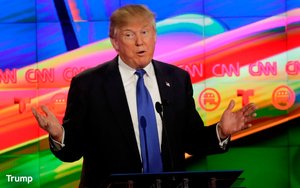 A debate over all the attention being paid by the news media to Donald Trump has simmered just below the surface of his improbable, vexing and, so far, successful campaign for president.

The conversation seems to center primarily on Trump’s omnipresence on TV newscasts and talk shows -- a position he assumed almost as soon as he announced his candidacy last June. He’s been omnipresent in every other form of news media as well -- in print, online, you name it. (Obligatory disclosure: Since last June, Trump has been the subject of 15 of these TV blogs I write every day here -- not counting this one.)

Taking it all in, some have come to the conclusion that the media has devoted far too much airtime and column inches to Trump’s campaign. These observers then blame the media and its coverage of Trump for boosting and promoting his candidacy.

Put simply, their point of view comes down to this: The news media has paid far more attention to Trump than it has paid to any other candidate. Ergo, Trump is trouncing all of the other Republicans by margins that are more or less proportional to the amount of media attention he’s getting, and that his rivals are not getting.

Those voicing the opinion that the media’s attention to Trump has been unfair to everyone else received some fuel for their argument in last week’s story in The New York Times that put a dollar amount on the value of all the “earned media” (translation: free p.r.) Trump has garnered since he threw his hat into the ring.

The story’s point seemed to be that Trump spent far less actual money on advertising and p.r. than the other candidates precisely because he was getting so much “free” exposure just by agreeing to so many interview requests and also making outrageous statements on various subjects that were sure to be covered everywhere.

As I have written at other times over the years when a single topic or big story seems to seize the imagination of journalists for a period of time over almost everything else, this “too much attention” debate is ridiculous.

It assumes that journalists -- the beat reporters, and their assignment editors and producers -- go around making decisions on stories based on considerations such as the percentage of time or ink devoted to this or that candidate. This argument also assumes that such decisions on that basis would even be possible, which they are not.

Moreover, such decisions would run counter to a journalist’s every instinct. Experienced journalists -- whether they’re reporting from the field or managing story lists in a newsroom -- are attracted to a day’s most important stories like moths to a lightbulb, for better or worse.

While the aim of any news organization is to report the news as reliably and accurately as it can, news organizations also have a vital need to draw attention to themselves. TV networks need ratings, Web sites need traffic and print publications need circulation. On what planet were these news organizations supposed to forgo these aims by ignoring Donald Trump on some given day in favor of covering, say, a Jeb Bush rally so that Bush would be able to achieve some sort of airtime parity with Trump?

The “too much coverage of Trump” argument also seems to assume that just because Trump is seen frequently on TV that this fact alone is leading to all of his victories in the primaries -- that if he wasn’t on TV so much, he wouldn’t be capturing the imaginations and votes of so many people.

This argument assumes a level of persuasive power on the part of the news media that is staggering. More than likely, Trump’s popularity is due to the simplicity of his message, which is: Government bad, me good.

It is entirely appropriate to argue for or against the value or quality of this message, of course. And in fact, gobs of ink and airtime have been devoted to airing the views of many who are against Trump -- from the talk show hosts at MSNBC all the way to the editorial writers at The Wall Street Journal.

For that matter, despite what the Times’ story revealed about the media exposure Trump has enjoyed over the last 10 months or so, it is also true that just about every other candidate in the race -- Republican and Democratic -- has been seen frequently on newscasts, in prime time debates, on the weekday morning talk shows and the Sunday morning public affairs shows.

To most people, all of the candidates have been omnipresent, particularly as the ranks have thinned. While the research the Times cited (conducted by mediaQuant apparently) was certainly eye-opening, no single average person saw all of this coverage that Trump seemed to grab at the expense of all the others. In addition, no average person sits there and tallies how much air time one candidate is getting and another one is not.

For most of us, the whole thing is one big cacophony. Perhaps you might say that Trump’s voice has been the loudest one in this free-for-all, enabling him to attract the attention of voters and media alike.

That’s certainly a subject that should be discussed: That our elections now hinge on who’s loudest. Blaming the media for providing a conduit to all this noise seems like an exercise in shooting the messenger.