NBC's New 'Heartbeat' Heroine Is A Miracle Of Modern Medicine 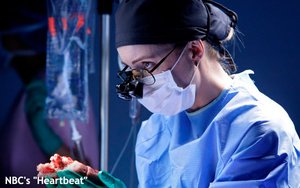 An air of unbelievability permeates the atmosphere in “Heartbeat,” NBC’s new drama series about a super-surgeon.

She’s brilliant, but flawed, of course -- but only if you consider being gung-ho for saving lives at the expense of every rule in the book a character flaw.

Certainly, we have seen these heroics before in TV hospital shows and, in many cases, we have been willing to accept them. In “Heartbeat” -- which gets a “preview” premiere Tuesday night on NBC and another premiere in its regular time period on Wednesday -- it’s not so much the over-the-top surgical triumphs of wunderkind cardiothoracic surgeon Alexandra Panttiere (played by Melissa George) that present a barrier to believability.

Instead, it is a succession of smaller things that make you ask yourself: That can’t be right, can it? For example, in the very first scene in the premiere episode, Dr. Panttiere is boarding a plane when she discovers that a man is sitting in her first-class seat. When she brandishes her ticket and insists it’s her seat, he ignores her and she ends up sitting in coach. At no time is it demonstrated that she was in the wrong. So you wonder: Wouldn’t a flight attendant have come along and forced this man out of first class? In real life maybe -- but not on TV, apparently.

Later, in yet another of TV’s ubiquitous flashbacks, Dr. Panttiere is shown as a young intern who dons a surgical mask to sneak into an operating room where a heart transplant is taking place. She doesn’t belong there, and she’s masquerading as someone who is supposed to be there. And yet, she assists in the surgery and even holds the patient’s heart in her two upturned hands. Later, she doesn’t get in trouble for this, although her unauthorized presence in an OR -- not to mention her actual participation in the procedure -- are probably both grave risks for the hospital should the news ever leak that anyone who wants to can enter an operating room and perform surgery.

Still later in the one-hour premiere (in which a lot happens), a young patient’s life hangs in the balance and Dr. Panttiere vows -- over the objections of a chief surgeon and a hospital administrator -- to successfully perform a life-saving procedure that only four doctors in the entire world know how to do, and she’s not one of them. Since this is TV, you can guess how this turns out.

At one point during this procedure, an operating-room nurse hands Dr. Panttiere the patient’s new heart, and -- wouldn’t you know it? -- the darn thing is frozen! So they defrost it with a blowdryer that appears out of nowhere. This isn’t standard operating-room equipment, is it? And while we’re on the subject, how is it possible to thaw a frozen human heart with a hot hair dryer when the heart is inside a plastic baggie? Wouldn’t the baggie melt and then make a mess of this vital organ that is supposed to be placed inside another human being?

Oh, never mind. Super-surgeon apparently has it covered. She’s a thoroughly modern creation of contemporary TV. She’s gorgeous, successful, and has a handsome boyfriend who is also a surgeon. He cheated on her a few months ago, but she forgives him. She also has a loving, just-friends relationship with her dashing ex-husband who happens to be a rock star -- and, as it turned out at some point during their 10-year marriage, he’s also gay. She’s OK with that too because he’s a cool dad for their two sons, one of whom is autistic.

Following a particularly miraculous surgical triumph, the hospital’s administrator tells Dr. Panttiere that the p.r. department will now arrange appearances for her on “The Today Show,” “Dr. Oz,” “Ellen” and “Jimmy Fallon,” as if getting her booked on these shows -- basically to talk about a surgical procedure that no layperson in the audience will likely understand -- is the easiest thing in the world.

Meanwhile, the rest of us are thinking: Where are all the doctors like Dr. Panttiere when I need one? They’re all on TV apparently, where you can’t make an appointment.

“Heartbeat” premieres with a preview episode Tuesday night (March 22) at 9 Eastern on NBC. It premieres in its regular time period with Episode 2 on Wednesday (March 23) at 8 p.m. Eastern.