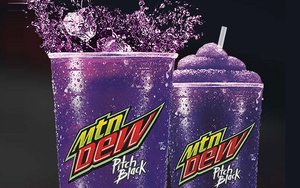 Mountain Dew has been busily launching and reviving a growing number of varieties within its flagship line and highly successful Kickstart spinoff line.

This month marked the latest limited-time revival of Mtn Dew Pitch Black. The dark, grape-flavored variety is available through June only in Speedway convenience stores across the U.S. — not in cans and bottles, but as a fountain drink and (in some Speedway stores) a Speedy Freeze beverage.

The flavor, originally offered during Halloween 2004, has been one of the all-time most requested flavors on social media, according to Melissa Miranda, director of marketing, PepsiCo Foodservice.

And Mountain Dew has repeatedly brought it back for short periods — most recently just this past December, when fans vied for samples of a limited-run of Pitch Black via a sweepstakes in which they posted why they wanted the flavor (using #WeWantPitchBlack).

The logic of the fountain/frozen drinks distribution deal with Speedway isn’t hard to grasp: The beverage brand and the C-store chain share a heavily young-male consumer base.

Mountain Dew is again using a sweeps to drive awareness and sales for the limited-time offering. Fans can participate by sharing a photo of themselves with a Mtn Dew Pitch Black beverage, in a Speedway store, using #PBSpeedwaySweepstakes. The prizes include Pitch Black-branded apparel items, headphones, mountain bikes, and skateboards and helmets.

In addition, Pitch Black will be up against the brand’s Baja Blast flavor in Mountain Dew’s 2016 DEWcision promotional poll, according to Pitch Black’s entry in Wikia.