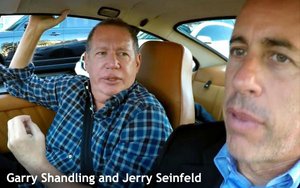 Garry Shandling might have said of his own death that he was too young to die.

He was 66 when he died  suddenly last Thursday. But some months previously, he and Jerry Seinfeld joked about news reports in which people who die in their 60s are described as “too young.”

The two had this conversation while taping an episode of Seinfeld’s show “Comedians in Cars Getting Coffee.” The show debuted on Crackle in January, so it was likely taped at least a few weeks before that. In the show, the two are seen riding around Los Angeles with Seinfeld at the wheel of a 1979 Porsche 930 Turbo.

At one point, they begin to talk about two comedians who recently died -- David Brenner, who was 78 when he died in March 2014, and Robin Williams, who committed suicide in August 2014 at age 63. Shandling told Seinfeld how he first heard about Williams’ death while watching CNN. “And Wolf Blitzer says, 'Sixty-three is so young,' and then I looked up with a little hope because I’m the same age as Robin,” Shandling said. “And then I realized '63 is so young' is a phrase you never hear relative to anything but death. 'Sixty-three is so young to be playing in the NFL' … You don’t [hear that]!” Shandling said.

To which Seinfeld replied, “You have to die in your 60s for them to say, ‘Boy, he was young!”

The subject of death comes up again and again in this 22-minute installment of “Comedians in Cars Getting Coffee.” In one portion, Shandling and Seinfeld (who is 61) take a daytime trip down Memory Lane with a visit to the Comedy Store, the L.A. comedy mecca where so many famous comedians worked when they were young.

As the two stroll through this empty nightclub looking at the photos and names lining its walls, they note how many of these comedians are dead. “It’s like every other person has passed away,” remarks Shandling while gazing upon pictures of Freddie Prinze, Sam Kinison, Andy Kaufman and others.

In the episode’s pivotal “coffee” scene, as Seinfeld and Shandling are talking over lunch at an L.A. restaurant (Du-par’s), Shandling describes a scenario he imagines for his own funeral. “What I want at my funeral is an actual boxing referee to do a count and at 5, just wave it off and say, ‘He’s not getting up!’ ”

At the end of the episode, Shandling tells another story about death. “You know, I went in to get a CT scan last Wednesday,” he tells Seinfeld, “and I go in there and the guy says -- the tech guy -- ‘Hey, Garry Shandling, I’m a big fan!’ He said, ‘I did a CT scan a year ago of you.’

“He said, ‘Do you have cancer?’ I said no. He said, ‘Good! So you’re still alive,’ he said, ‘because I was watching the news and it seems like if you had passed away, I would have heard about it on the news.’

“And I said, ‘Well, I don’t know if they would have broken in or anything …’ But I didn’t know what to say to the guy!”

"He kept at it," Shandling continues, “and he said, 'That’s so great that Garry Shandling’s still alive'!" Not knowing, of course, that Shandling would die only a few months after this installment of "Comedians In Cars Getting Coffee" would premiere, Seinfeld adopted that last statement as the title of the Shandling episode.

The conversation earlier in the show about David Brenner and Robin Williams touched on the “impermanence” of life. “You know, David Brenner passed away, like, last year,” Seinfeld says. “Do you ever think about all that material?”

And Shandling replies, “I’m at a stage in my life where I actually care about the person. Here’s what I thought you were going to say: ‘Did you ever [think about], when David Brenner died, and Robin [Williams], the actual impermanence of life? I never thought, ‘God, there goes a lot of material!’ ”

But the material is a comedian’s legacy. And Garry Shandling left a lot of it. At one point while riding in Seinfeld’s Porsche, the two pass a tanning facility. “Would you ever go into a tanning salon?” Seinfeld asks Shandling.

“Not without sunblock on,” Shandling answers.

tv
1 comment about "Shandling And Seinfeld: Two Comedians Talking About Death ".
Check to receive email when comments are posted.
Next story loading