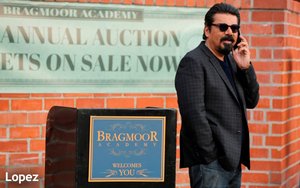 George Lopez’s wanderings through Sitcom Land have landed him at TV Land, where he is launching his third sitcom Wednesday night.

Lopez and the folks at TV Land have concluded that the comedian and the network are a good fit, based on the success of Lopez’s first sitcom, “George Lopez,” whose reruns have been running on co-owned Nick At Nite since 2007. It is reportedly the highest-rated show on Nick At Nite.

That was the sitcom Lopez starred in and co-created for ABC, where it ran from 2002 to 2007. His second comedy series was short-lived. It was called “Saint George,” and it aired on FX from March to May 2014, when it was cancelled.

In between sitcoms, Lopez, 54, had a late-night talk show, “Lopez Tonight,” which aired for two seasons on TBS, 2009 to 2011. The story on that show was that it was derailed by the arrival of Conan O’Brien in 2010. Before that, “Lopez Tonight” was the only late-night show on TBS. Airing weeknights at 11 Eastern, it was the network’s first-ever foray into late-night talk. A year after it premiered, however, O’Brien made his famous exit from NBC and TBS took up the opportunity to hire him. His show, “Conan,” was slotted at 11 o’clock and “Lopez Tonight” was pushed to midnight for its second season, after which it was not renewed.

The premiere episode of “Lopez” indicates that this was the right move. It enables him to act like himself in situations he himself has experienced (although the situations are exaggerated and embellished for TV). It also allows him to use his clout to draw a diverse group of guest stars. In the premiere of “Lopez,” two of them are Snoop Dogg and former Los Angeles Mayor Antonio Villaraigosa, who play themselves.

He also picked the right home for this new comedy. TV Land is distinguishing itself with some of the best half-hour original comedies anywhere on TV with “Younger,” “Teachers,” “The Jim Gaffigan Show” and others. “Lopez” will fit right in.

The premiere of “Lopez” sets up the scenario: This George Lopez is a successful, reasonably wealthy entertainer, so he lives in an upscale neighborhood in which he is the only Chicano. As he goes through his life, several things repeatedly happen to him. People mistake him for the parking valet, and friends and neighbors are always asking him to come and meet their housekeepers, who are always described as huge George Lopez fans.

In this week’s episode of “Lopez,” George is accused of racism when he absentmindedly mistakes Mayor Villaraigosa for a parking attendant. Elsewhere in the episode, George agrees to be the star of a celebrity “auction” for his daughter’s private school, the prestigious Bragmoor Academy. The winning bidder gets George to act as an assistant for whatever chores the winner wants --including landscaping and parking cars (or washing them).

Just about the only jarring aspect of the “Lopez” premiere is how it ends -- which is that it really has no ending at all. It’s as if the show either ran out of time or no one could figure out how to close out this storyline anyway, so they just decided to bring it to a sudden and abrupt end and let the credits roll.

As awkward as that ending is, it at least means that the show left me wanting more, as opposed to so many shows -- especially sitcoms -- whose endings cannot come soon enough.