Millennials Are NOT The Enemy 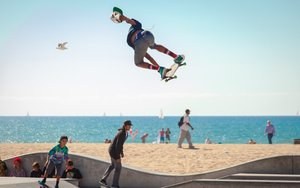 I’m getting really tired of reading how Millennials are the enemy.

It’s not said in so many words, but I see story after story and panel after panel about how Millennials are different than their forebears.  How this is a generation that lacks loyalty to brands.  They multitask an average of four more activities while watching TV than older audiences.  They’re blocking ads.  They don’t use Facebook.

Blah, blah, blah. If you add up the sum total of everything written about Millennials, you come to a possible conclusion that there's a war on media being waged by the Millennial generation -- which is simply not true.  The fact is, we’re blaming Millennials for our own faults.  The truth is, we sort of suck at what we do right now.

As the old adage goes, “A good carpenter never blames his tools.”  I know the analogy doesn’t exactly apply, but let’s go with it for a moment.   It’s not that there’s an audience who hates us.  It’s that we’re not offering them enough value to resonate and be deemed important.

Think of it as like teleportation: In “Star Trek,” you could “beam” from one place to another.  This meant deconstructing your body on one side, transporting it through space-time to another location, and reconstructing it.  The world of modern marketing is much like that, where you have to disassemble your brand and the value you offer, “beam it” across many devices, and empower your audience to reassemble the pieces on their end, in their own time, to determine if the message resonates with them.  And just like the transporter beam in Star Trek, we’re not quite there yet.

Millennials are but one generation of consumer, and they are different than those before them.  So were the Baby Boomers.  So was Generation X.  So will be the generation that follows the Millennials.

A year or so ago I heard someone say he was trying to hire analysts with a commercial mindset, and that resonated with me as a marketer.  Now I am suggesting we hire data scientists with a creative flair, who can take an insight and create emotional resonance. I want media planners who are able to read data, build audiences and suggest insights that tap into emotional connection.  I want creative people who are not afraid of, or simply defiant of, data, but instead see it as a path to the insights that will help them create emotional connections with consumers.

The next time you see a panel about Millennials, realize that panel is focused on a Band-Aid and not a cure.  The solution is to understand any audience and create a connection, rather than try to pretend you know one segment of the audience -- and that your entire future hangs on that one group.

millennials
3 comments about "Millennials Are NOT The Enemy ".
Check to receive email when comments are posted.
Read more comments >
Next story loading