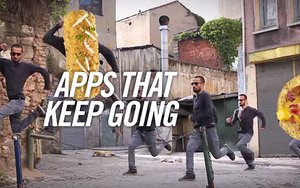 TGI Fridays has hit on an innovative way to promote its “Endless Apps” (as in appetizers) offer.

Playing on the endless angle, agency Made Movement enlisted new-media artist Erdal Inci to create three videos made of endlessly looping GIFs — with one of the videos being used as a TV spot.

The 15-second video being used as the TV ad, “Duo Jump” (screen grab above), shows a cool-looking guy, followed by appetizers with legs, endlessly running and jumping across the screen.

The other two 15-second GIFs feature hoodie-clad guys and appetizers with legs endlessly engaged in sliding down a railing and jumping from pedestal to pedestal in a parkour-like exercise.

These are the latest efforts in support of the brand’s mission of expanding its Millennial customer base.

The chain-wide brand overhaul caters to the highly social nature of Gen Y’s by putting the restaurant’s bar back at the center of the space, and updating the chain’s hand-crafted drinks and foods.

A new prototype format in Corpus Christi, Texas boasts an open layout and multi-bar areas for socializing and hanging out for off-site work purposes, extended hours, late-night entertainment and “hangover brunches” on weekends.

The new menu’s emphasis is on foods that are visually appealing and shareable—“not just on the table, but in fun graphic treatments on our owned channels,” says TGI Fridays CMO Brian Gies, referring to the brand’s “App Characters.”

Fridays was “the original social instigator in our space,” and is now “on a progressive path to reclaim our rightful place as the social hub,” Gies tells Marketing Daily. “We’ve really gone back to our roots, establishing Fridays as the social expert in the restaurant industry.”

A new prototype format in Corpus Christi, Texas boasts an open layout and multi-bar areas for socializing and hanging out for off-site work purposes, extended hours, late-night entertainment and “hangover brunches” on weekends.

The brand continues to see high engagement across all social media channels, according to Gies, who reports that the new GIFs creative generated more than 1.3 million views across channels within just three days.

Friday’s, acquired in 2014 by private-equity firms Sentinel Capital Partners and TriArtisan Capital Partners, doesn’t reveal sales stats, but Gies says the brand is “very pleased with the progress of our 360-degree marketing approach, including our social media strategy and targeted paid support.” Friday’s’ creative “has taken on a new life that truly reflects the tone and social roots of our brand,” he adds.

According to Technomic estimates, Fridays’ domestic sales declined for six years through 2012, when they totaled $1.7 billion — down from a pre-recession $2.1 billion — although it made net profits in both 2011 and 2012. Nation’s Restaurant News put the chain’s fiscal 2014 U.S. sales at $1.8 billion.

1 comment about "TGI Fridays Promotes Its 'Endless Apps' With GIF-Format TV Spot".
Check to receive email when comments are posted.
Next story loading