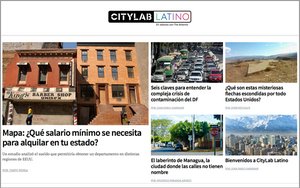 The Atlantic and Univision Digital have launched CityLab Latino, a Spanish-language platform spinning off of The Atlantic’s digital publication CityLab.com.

The Web site features original stories in Spanish, as well as translated stories from CityLab.com, focusing on issues facing today’s global cities where Spanish is spoken, according to a statement.

The vertical will be available on Univision.com, a major multiplatform digital property for U.S. Hispanics.

CityLab Latino is the first non-English venture for The Atlantic and is part of Univision’s growing digital portfolio, including FUSION, The Root, The Onion, Variety Latino, El Rey and Flama.

“This partnership allows us to widen CityLab’s range and put its ideas-driven journalism before a new audience,” stated James Bennet, editor in chief and co-president of The Atlantic.

CityLab Latino’s editor is Juan Pablo Garnham, who is based in Miami with Univision. Garnham was previously a city hall reporter with El Diaro in New York and a staff writer at Qué Pasa magazine in Santiago, Chile.

The editorial team for CityLab Latino will be split between Miami and Washington, D.C.

Garnham’s team has three original stories for the launch of CityLab Latino: the use of bikes to combat obesity and poverty in Brownsville, Texas; a former guerrilla-controlled city in Colombia that's now embracing tourism; and a possible app-based solution to the lack of formal street names in Managua, Nicaragua.

The site is accessible at Univision.com and at www.citylablatino.com.

As Publishers Daily previously reported, president of news and digital for Univision Communications Inc. and CEO of Fusion Isaac Lee stated that the partnership will expand the digital content targeted to Spanish speakers in the U.S.

CityLab Latino is the second partnership of this kind for Univision Digital. In early 2014, Univision introduced Variety Latino, a collaborative effort with Variety.