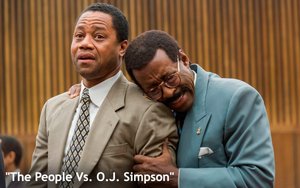 Was this spoiler alert really necessary?

Or to pose this question more specifically: Is there anyone on Earth who doesn’t know that O.J. Simpson was acquitted in his murder trial -- a verdict that stunned the world? Well, if you didn’t know this, sorry for spoiling it.

The folks at FX apparently think some people didn’t know the verdict. So the p.r. department included a request for TV scribes in an advisory e-mail they sent out last week with a link to watch the final episode of “American Crime Story: The People Vs. O.J. Simpson” (subtitled “The Verdict”) in advance of its air date Tuesday night.

“No spoilers,” read the request, “and we are asking that NO REVIEWS BE POSTED UNTIL THE EPISODE AIRS ON TUESDAY, APRIL 5 AT 10 PM E/P” (capitalization theirs, and it was also in bold).

OK -- far be it from me to violate a request from a network p.r. department. And for all I know, FX’s instinct might have been correct -- that there may have been some viewers, and maybe even a lot of them, who didn’t already know how Tuesday’s “Verdict” episode would play out.

It is sometimes hard for me to imagine that there may be viewers who were very, very young or not even born yet in 1995 for whom the O.J. Simpson case was not a real experience they lived through, but merely a historical event to which they have no connection -- like the Civil War or Watergate or the Reagan administration.

For those of us who were around in the 1990s and engaged in the world around us, the Simpson story -- and most especially the televised verdict on Oct. 3, 1995 -- is something we can never forget.

FX’s no-spoiler request notwithstanding, I suspect that the vast majority of those who watched the 10th and final episode of this “event” series Tuesday night on FX knew how it would turn out. For the producers of this series, that was the central challenge of not only the final “Verdict” episode, but of all the other episodes that came before it -- to make their series suspenseful and compelling despite the fact that so many of us were already so well-acquainted with most of its aspects.

It goes without saying that the not-guilty verdict in the finale likely came as no surprise to most of those who were watching. And yet the show still managed to build a degree of tension around the moment, possibly because after nine episodes, viewers already had so much invested in the feelings and reactions of the drama’s principal characters -- mainly, the lawyers on both sides of the trial.

So while most of us knew what the verdict would be, the scene played out about as well as it could have played in the TV version as the actors -- led by Cuba Gooding Jr. as Simpson (pictured above with Courtney B. Vance as Johnnie Cochran) -- all reacted in the way we remember them reacting when we all watched on that October day in 1995.

The 1995 reading of the verdict represented a singular moment in TV history. It was a telecast that was so widely watched that a Google search this week for audience data came up with a wide range -- anywhere from 95 million to 150 million people -- which means the audience was so large that it really could not be accurately tallied.

A key reason why the audience was so large was not delineated in the script that was created to reproduce the verdict drama for TV. If memory serves, the news that the jury had reached a verdict broke some time late on the day before the verdict was actually read in court. And the court then set a specific time the next day that the trial would reconvene for the reading of the verdict -- 10 a.m. Pacific time, 1 p.m. Eastern and noon Central.

Since the entire nation -- if not the world -- knew well in advance exactly when to stop what they were doing and find a TV to watch in the middle of the day on Oct. 3 (a Tuesday), the result was that the whole world seemed to stand still as millions gathered in homes, workplaces and public squares (such as Times Square in New York) to watch the verdict together.

In Tuesday’s 66-minute episode on FX, the verdict came somewhere in the middle of the show. The rest of the episode dealt with the aftermath in the day or so after the verdict, as O.J. went home to Rockingham, the prosecution came to grips with losing the case, and Simpson’s lawyers savored their victory.

The show ended with pictures of murder victims Nicole Brown Simpson and Ron Goldman as a reminder that they were real, and that they were the real victims here. It was a nice touch.