In CW's 'Containment,' The Walking Dead Have A Deadly Flu 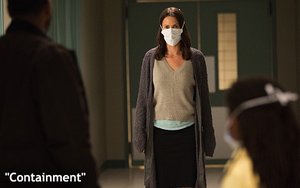 Between the zombies and the terminally ill, Georgia certainly has its hands full.

There’s a “Walking Dead” quality to aspects of this new “limited-event” series called “Containment” that premieres on the CW Tuesday night (April 19).

Both “The Walking Dead” and “Containment” -- which tells the story of a fictional deadly flu outbreak in Atlanta -- are Georgia-based productions. And some of the scenes in “Containment,” in which patients afflicted with this terrible flu are covered in their own blood and staggering blindly down city streets, bear a close resemblance to the marches of zombies that characterize so much of “The Walking Dead.”

They’re even killed the same way. In “Containment,” some of the most virulent patients are put down by armor-clad police with high-powered weapons. But these encounters come later in the series, although they’re glimpsed briefly in the premiere.

Episode One wastes no time establishing the source and severity of this new outbreak. It might offend the politically correct crowd, but the blame for this epidemic gets put squarely on an immigrant from Syria who seems to have deliberately smuggled a vial of this pathogen into the United States.

He also becomes among the first to die from it, but the damage is done. The disease spreads like fire in dry grass. An afflicted person only has to sneeze within six feet or so of someone else and the other person’s a goner and also highly contagious.

So the authorities try to contain the outbreak first by quarantining houses and the people in them who have come into contact with the sick, then locking down an entire hospital, and then, by the end of Episode One, throwing barriers around an entire section of Atlanta in a strategy known as a cordon sanitaire.

Will the quarantine work? I wouldn’t bet on it, since a show like this is so much more dramatic when plans like this go awry. Even after just one episode, it appears unlikely that the sick or potentially sick can be confined behind a mere cyclone fence, even one that has been electrified.

Among the notable aspects of “Containment” is this show’s unfamiliar cast. You’re not likely to recognize any of them unless you are a very eagle-eyed TV and movie geek who remembers this one from his role in “Interstellar” or that one from her role in “Spartacus: War of the Damned.”

The advantage of this is that a viewer has no inkling about who will live or die in “Containment.” It’s something we’ve been conditioned to do -- to know instinctually who will survive or remain the longest in a disaster movie or TV show based on the relative fame of each cast member. When you have a TV show or movie like this, the biggest stars are often the least likely or the last to go. In this regard, in “Containment,” all bets are off.

Without expecting it to be this way, I found the premiere episode of “Containment” to tick all the boxes for horror TV shows. As the show progressed, the fear factor increased in direct proportion to the epidemic itself -- starting out slowly and then suddenly accelerating as the epidemic itself began to escalate.