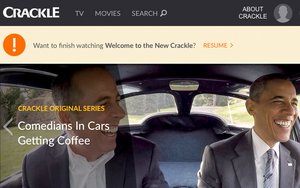 Sony’s growing Crackle video-streaming network is starting up a effort to slim down the number of commercials for a given original series.

As a part of its upfront presentation, viewers will see only five ads per episode of an 10-episode original Crackle TV series. This would be far less than estimated 300 commercial messages over the course of a series running on linear TV. It calls this effort “break-free advertising.”

Each of those five spots will be sold to different marketers in each of those 10 episodes. Sony says those advertisers “will be able to tell a story across multiple episodes with only four other advertisers to capture the viewer’s attention.”

Car brand Infiniti will be the first marketer for this effort, attached to the second season of “The Art of More.”

In addition, Crackle will “supersize” these commercials, packaging it with other content threaded together across all 10 episodes. The content will include narratives about the show’s setting, special insights about the characters, or a look behind the scenes.

Sony did not disclose the duration of these TV commercials for Crackle TV series.