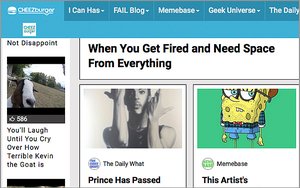 The infamous meme blog Cheezburger has been sold to Literally Media, a media company that also owns eBaum’s World. Literally Media hopes the combination of millennial-targeted humor and entertainment brands will be more attractive to advertisers.

Cheezburger gained fame from a single meme created by cofounder Eric Nakagawa: a photo of a cat with the caption “I can has cheezburger?”

Soon the blog grew to become the Cheezburger Network, which included other sites: FAIL Blog, The Daily What, Know Your Meme and Memebase.

Cheezburger will continue to be led by digital media executive Scott Moore, who joined as COO in 2013. He became CEO last summer.

"I'm excited that Cheezburger is joining Literally Media because I believe that the combined offering of eBaum's World and Cheezburger will make us a 'must have' on any millennial or Gen Z-focused media plan," stated Moore.

Literally Media was founded in Tel Aviv in 2015 by ad tech veterans from eXelate, Microsoft, Ybrant and Lycos.

Moore called the acquisition, given the importance of technology in publishing today, "a great win for us and will allow us to utilize more traffic and audience data at scale to improve the efficacy of our clients' campaigns.”

According to a statement from Literally Media, the company will focus on offering better, more interactive advertising for eBaum’s World and Cheezburger, including integrated native ad units which are humorous and engaging to match the content of the sites on which they run, coupled with the new scale and reach.

"We've already succeeded in implementing data driven decisions in the operations of eBaum's World, using Literally Media's proprietary data optimization technology, and truly believe this is just the beginning of our journey to expand our reach with this fascinating audience,” sated Ori Elraviv, CEO of Literally Media

While the brands will stay independent of one another, Literally Media will be creating ad sales packages for media buyers and planners, including both sites. According to Elraviv, the combination of the two sites is now a “much more attractive ad buy.”

“Scale was clearly a driver for this acquisition,” Elraviv told Publishers Daily. “We are planning to take advantage of the economies of scale in terms of monetization, but also on the product optimization, as well as audience acquisition and retention,” he said.

Elraviv added that he sees a lot of opportunity for native advertising.

The statement claims that combining these two media properties ranks them no. 5 in the Entertainment – Humor category according to comScore data from January 2016. Separately, eBaum’s World is no. 9 and Cheezburger is no. 10.

At its peak in 2011, the Cheezburger Network brought in over 375 million page views every month. But page views dwindled, and in July 2013, then-CEO Ben Huh cut 24 jobs, about a third of the company’s employees. Huh left in July 2015.

According to the Seattle Times, it was announced in February that Cheezburger was being sold, but the buyer wasn’t named until yesterday.
m&a, native advertising, web sites
Next story loading