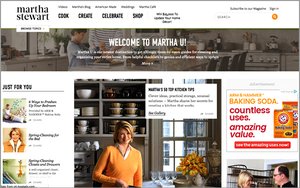 The cross-platform series produces content in print, digital and video. A print toolkit is in the April issue of Martha Stewart Living.

Articles, galleries and checklists are on MarthaStewart.com, offering readers advice on how to clean and declutter their homes.

Daren Mazzucca, VP and publisher of Martha Stewart Living, said the partnership offered a "one-two punch that has enabled the Martha Stewart brand to develop original content utilizing Martha herself."

"Martha University" content is available in the current issue of Martha Stewart Living magazine in the form of a tear-out, "how-to" spring cleaning booklet.

An original video series will be released April 26, featuring a “home cleaning rescue” by Martha Stewart herself.

Evan Nisenson and his family from Summit, N.J. won a social media contest called "Rescue Me, Martha!," which invited the public to share their messy homes with Martha Stewart and a panel of “home experts” with the chance to win a cleaning makeover from Martha Stewart.

The video series will showcase Martha’s “rescue” of Nisenson’s home, armed with Arm & Hammer baking soda and a professional cleaning team. The series airs on the “Martha University” hub on MarthaStewart.com.

Throughout the spring cleaning season, the digital hub will be updated with new housekeeping content in response to readers' cleaning problems and questions and will feature cleaning uses for Arm & Hammer’s baking soda.