Dumb Idea Of The Week: 'Match Game' With Alec Baldwin 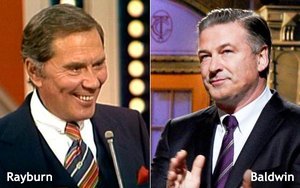 Game shows are supposed to be fun. So who on Earth came up with the idea of hiring wet blanket Alec Baldwin to host a new version of “Match Game?”

And while we’re asking questions about this game-show reboot, which was announced so triumphantly by ABC on Thursday, here’s one: Who exactly was clamoring for “Match Game” to be remade anyway? Audiences old enough to remember the old one? Curious Millennials? Probably neither.

“With the charismatic and quick-witted Alec Baldwin as our host, ‘Match Game’ has all the right elements to be a fun and entertaining summer staple,” said a prepared statement in ABC’s press release from Jennifer Mullin, co-CEO of FremantleMedia North America, producer of this new “Match Game.”

“Fun and entertaining”? With Alec Baldwin? On what planet is this supposed to take place?

To be fair (which I do try to be), Baldwin has shown himself to be fun and entertaining sometimes. As a comedic actor, he was great on “30 Rock” and he’s become a semi-regular on “Saturday Night Live,” which is also sometimes a funny show.

But at many other times, he’s just a buzzkill, depending on his mood on any given day or at any given moment. I’ve seen him be a charming, outgoing guest in some (if not many) of his appearances on the late-night talk shows, for example. At other times, I’ve seen him on talk shows where it seems as if he just got bad news from a doctor or perhaps the IRS moments before coming onstage.

Remember the talk show they gave him on MSNBC in 2013? When the ratings tanked, it was cancelled after five episodes. It didn’t help that Baldwin had recently tussled with paparazzi outside his New York apartment and reportedly used a homophobic slur when yelling at one of them.

Plus, you have to wonder why this movie star would say yes to hosting a game show. Was this on Alec’s personal bucket list for some reason?

Apparently, he doesn’t intend to profit personally from this new venture. According to ABC’s press release on “Match Game,” Baldwin intends to donate the money he earns on “Match Game” to one of his favorite “arts-related” charities (although the release doesn’t say which one). Good for you, Alec.

ABC’s plan for “Match Game” calls for 10, one-hour episodes to air on Sunday nights this summer starting June 26. The show is part of ABC’s scheme to elevate game shows to prime time. The network is calling its three-hour game bloc “Sunday Fun & Games.” The other shows are “Celebrity Family Feud” with Steve Harvey and “The $100,000 Pyramid” with Michael Strahan.

And while we’re on the subject of air talent, another question: When did Michael Strahan emerge as the go-to guy for just about everything on ABC? I just don’t get it. Suddenly, Strahan is Regis Philbin, who once famously remarked that he would singlehandedly save ABC when they made him the host of the first incarnation of “Who Wants To Be a Millionaire?”

The old “Match Game” was known for the naughty (for the time) fill-in-the-blank answers to questions posed by host Gene Rayburn to his celebrity panelists. Those of us of a certain age can conjure up memories of tart-tongued participants such as Charles Nelson Reilly and Bret Somers providing some of the tartest-tongued answers on the show. The old “Match Game” can still be seen on TV, on GSN (Game Show Network).

To me, here’s the difference between the old game shows such as “Match Game” and “Pyramid” and these new reboots: The old ones were made for daytime, as diversionary entertainment for anyone who was home during the day -- housewives, older people, kids home from school with a cold or flu.

That’s the environment in which I choose to remember them. Turning them into one-hour extravaganzas for prime time seems to me to be an exercise in blowing them out of proportion. I do realize ABC has already had success with Steve Harvey and “Celebrity Family Feud.” So you can hardly blame the network for trying other game shows.