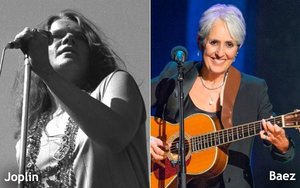 One of them died long ago and one of them is still here, having lived long enough to celebrate her 75th birthday with celebrity pals last January in New York.

Both of them -- Janis Joplin, who died of a drug overdose in October 1970 at age 27, and Joan Baez, who turned 75 on Jan. 9 -- get the PBS treatment this week in two separate shows. The two shows provide proof (as if further proof were needed) that PBS intends to continue in its quest to keep the 1960s alive, come hell or high water.

It seems fairly obvious by now why PBS returns again and again to these 1960s music-fests: Its audience is made up largely of Baby Boomers from whom PBS wishes to draw donations. So the paeans to the decade of this group’s rebellious youth continue.

This week’s examples are an “American Masters” documentary subtitled “Little Girl Blue” about Joplin premiering Tuesday night (May 3) and a “Great Performances” premiering Friday (May 6), in which Baez is seen singing duets with a variety of partners. The concert was taped at the Beacon Theater.

After groaning for the umpteenth time about PBS returning to the not exactly fresh waters of the 1960s, I then try to judge these shows on their individual merits. Where this week’s ’60s shows are concerned, the Joplin documentary offered much more to chew on than the Baez performance.

But that’s just me. Others might feel very differently about the prospect of watching Baez and her friends. For me, though, Janis Joplin is the much more compelling figure. As this documentary makes clear with ample film footage of her performing, she was an electrifying talent, a young white woman from Port Arthur, Texas who somehow acquired a gift for processing and reproducing the blues music of African-Americans.

In this regard, I have never heard of anyone categorizing her with Elvis Presley, but when you watch this documentary, you are reminded of the phenomenon of Presley, whose affinity for the black music he grew up with even awed black people.

“Little Girl Blue” doesn’t delve into how or why Joplin gravitated toward the blues. According to the movie, she discovered she could sing when she joined the choir in high school, but where she might have developed an ear for blues music the documentary does not explore, other than to note that she once borrowed an Odetta record and liked it very much. (If memory serves, the music of Odetta also figures somehow into the Bob Dylan story, which means someone ought to do a documentary about Odetta.)

The story of how Joplin left Texas, migrated to San Francisco and then found herself at the center of the city’s legendary 1960s music scene makes for a documentary well worth watching. Interview subjects include her brother and sister, childhood friends, and former bandmates from Big Brother and the Holding Company. I could have done without the interview in which Bob Weir of the Grateful Dead recalled that Janis was so noisy in the sack that the whole house could hear her. This just seemed tasteless.

If she had lived, might we have been treated to PBS concerts here in the present day featuring Janis and her friends? Alas, but this was not to be. But Joan Baez is still here -- as much an emblem of that bygone decade as Janis Joplin, although the two are as different as rock and folk. A few years back, in yet another PBS special about the ’60s, I recall Donovan Leitch saying of Baez: “When I met Joan in 1965, I was enamored. Falling in love with folk music meant falling in love with Joan Baez.”

I was very young in the 1960s, and not part of any scene, so I’ll have to take Donovan’s word for that. On “Great Performances,” Baez’s duet partners include David Crosby (they sing “Blackbird”), Mary Chapin Carpenter (on Donovan’s “Catch the Wind”), Indigo Girls (Dylan’s “Don’t Think Twice, It’s Alright”), Jackson Browne (“Before the Deluge”), Judy Collins (“Diamonds & Rust,” which Baez wrote), and Paul Simon (“The Boxer”).

music, tv
1 comment about "PBS Continues Its Quest To Ensure That No One Forgets The '60s".
Check to receive email when comments are posted.
Next story loading