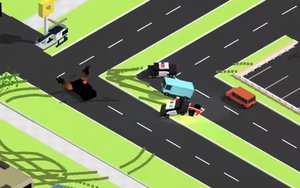 The move marks the first time the industry has issued decisions centered on mobile apps. The ad industry unveiled a mobile privacy code in 2013, but didn't begin enforcement until last September.

Spinrilla, which streams hip-hop music, allowed third-party ad companies to collect a host of data about users -- including geolocation data and unique device identifiers -- according to the watchdog. The company didn't notify users that their precise location data would be collected by third parties, the BBB reported.

The BBB's enforcement unit said that both apps appeared to be covered by that law, because they seemed directed at children under 13. In Mouse Maze, for instance, the main character is "a cartoon mouse with exaggerated features," the watchdog writes.

Both companies unsuccessfully argued to the BBB that their apps were intended for a general audience.

Top Free Games and Bearbit told the watchdog that they have implemented age-screens and won't allow third parties to collect persistent identifiers from users younger than 13.

Top Free Games said it won't commit to a voluntary self-regulatory program because it isn't a U.S. company. But the BBB's Online Accountability unit says it "will actively monitor" the company to determine whether it is complying with the privacy code.

All three developers were also faulted for failing to provide "enhanced" notice about cross-app advertising. The industry code requires developers to provide enhanced notice if they allow ad networks (and other third parties) to collect data in order to serve users targeted ads across different apps. Often mobile developers accomplish this via links that take people directly to sites that offer information about interest-based ads.