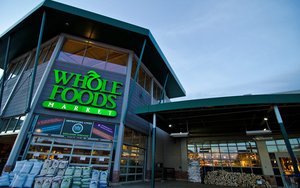 With sales still slipping at Whole Foods Markets, the company says it is continuing its efforts to lower prices, and getting ready to support those changes with increased marketing.

The Austin, Texas-based retailer says that while overall sales rose to $3.7 billion -- a record -- comparable-store sales dropped 3% -- a bigger dip than in recent quarters, and more than observers expected.

In a conference call, its executives explained the investments it was making, first in lowering its prices, and then in communicating those values to consumers. “We are ramping up our marketing behind digital coupons, in some markets stepping up mailings to people’s homes,” says John Mackey, co-founder and co-chief executive officer of Whole Foods Market, during the call. “That marketing is the next big step. We can lower prices here and there, but if people don’t know about them, we won’t get the full lift.”

“We are doing more to invite customers into stores through advertising, digital and radio,” says co-CEO Walter Robb. “And our teams do a terrific job of merchandising for them. So it’s creating a virtuous circle.”

As a result of the decline, it lowered its financial forecasts for the year. And while it says it is hopeful those comparable-store results will improve, there will be some impact from stepped-up marketing expenses and price investments.

Observers applaud Whole Foods’ strategy of addressing its “Whole Paycheck” reputation, and point out it faces increasingly stiff completion from other mainstream grocers, such as Kroger and Safeway, which are bringing their organic A-game to stores. And Trader Joe’s also continues to fight for its share of healthy-food shoppers. But many are still skeptical about the kickoff of its new 365 format, with the opening of the first store a few weeks away.

Morningstar still thinks the company “has a differentiated concept in grocery retail, allowing it to charge premium prices,” writes analyst Ken Perkins. “But the experimental 365 stores, incremental price cuts, and increased marketing” means less predictability in its results. Because Whole Foods “is still in the process of determining the right mix of promotion and price cuts, as both are needed but can have different impacts on various customer demographics,” he’s not expecting any immediate growth.

And while Deutsche Bank thinks the retailer is “moving in the right direction,” write analysts Ryan Gilligan and Shane Higgins in their report, “we believe it could take time (and more investments) before fundamentals inflect.”