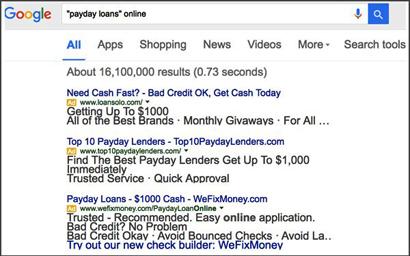 Google will no longer allow ads for high-interest, short-term loans to appear in paid-search results, the company said today. "Research has shown that these loans can result in unaffordable payment and high default rates for users so we will be updating our policies globally to reflect that," Global Product Policy Director David Graff said today in a blog post.

With the move, ads for payday loans will join ads for guns, drugs, and illicit activity on Google's blacklist.

Google's new policy, which goes into effect on July 13, will prohibit paid ads for loans with a repayment date within 60 days. In the U.S., Google also is banning ads for loans with interest rates of 36% or more. Google will still show links for payday lenders in the organic search results.

The company's new policy was cheered by the Conference on Civil and Human Rights and other advocacy groups, who argued to Google that payday loans exploit financially vulnerable people.

Alvaro Bedoya, executive director of Georgetown Law's Center on Privacy & Technology, adds that the companies behind payday loan ads wrongly exploit personal data provided by users. He says Google's move reflects a principle that people who provide sensitive information to companies they trust shouldn't be harmed as a result.

That report illustrated how a search query that indicated financial distress -- like “need money to pay bills” -- could lead to a financially disastrous loan.

The report outlined how ads for short-term loans led to landing pages operated by lead-generation companies that asked users for detailed personal information -- including income -- and then sold that information to other companies.