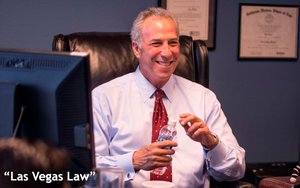 The DA’s office in Las Vegas agreed to have camera crews follow its staff of prosecutors around as they prepared for court, and then film the trials.

The result is this new docu-procedural (a term I just made up) called “Las Vegas Law,” which premieres Thursday night on the lurid cable channel known as Investigation Discovery (ID).

ID is the Discovery-owned cable network that specializes in telling tales of betrayal, adultery, murder and probably a few of the other human misbehaviors accounted for in the Ten Commandments.

It seems that almost every time I come upon this channel while grazing with my remote control, someone is holding a knife and about to start stabbing someone. ID’s best-known show might be “On the Case with Paula Zahn,” which is kind of like ID’s own in-house version of “48 Hours” or “Dateline,” the CBS and NBC news shows (respectively) that also traffic in telling a true-crime story in each one-hour episode. (ID carries “Dateline” repeats that are repackaged and renamed “Dateline on ID.”)

In the many hours when Paula Zahn isn’t classing up the joint, ID airs dozens of shows focusing on violent crimes with an emphasis on murder -- most frequently by husbands and/or wives (or so it seems).

One show, titled “Elder Skelter,” is apparently a showcase for stories about violent crimes among the senior set. Here’s how ID promotes the show on its media Web site: “Too old to enjoy their riches, too old to keep dry britches, but not too old to snuff out some b*tches! Prepare to hide under your lap blanket, because Investigation Discovery’s new series tells shocking stories of senior citizens who committed cold, calculated crimes.” A gold star to the writer of this lively, vivid piece bit of promotional copy.

ID claims to draw a healthy share of women 25-54 for its lineup of shows in which words such as “dead,” “blood,” “evil” and “fatal” occur again and again in the titles.

In this context, “Las Vegas Law” is comparatively tame, even if at least one of the crimes covered in the one-hour premiere is a triple homicide for which a defendant might face the death penalty if he is found guilty. The other case in the show concerns a male massage therapist who is charged with molesting two of his clients.

On the show, we get to watch as various assistant DAs plan their strategies and interview their witnesses, all under the supervision of Clark County DA Steve Wolfson, who seems more than happy for his office to star on this TV show. That’s District Attorney Wolfson in the photo accompanying this blog post.

We then get to witness the trials, or at least an abridged version of each of them, since both trials are shown in this one-hour show. The murder case was a high-profile crime, since it took place at a prominent intersection in the heart of the Las Vegas strip. It involved a multi-car smash-up that began when one man -- the defendant -- fatally shot another man driving another car.

The car the dead man had been driving then careened into various other cars, including a taxicab that then exploded, killing the driver and his passenger, a woman from out of town who had a husband and four children back home. Oh, and it turns out the shooter thought the man driving the car was someone else, so the whole thing began as a case of mistaken identity.

The other case involving the massage therapist was more mundane, but no less serious to the man’s two alleged victims. In these portions of the show, a great deal of attention -- and perhaps too much attention –- is paid to the details of how he may have sexually assaulted these women. It turns out not to be an open-and-shut case, however, and the twists and turns it takes are mildly interesting, particularly for any viewer who is interested in how real trials work.

My only complaint about this show lies in one of the elements of its production -- namely, the use of quick edits that are intended to give an illusion of fast-paced storytelling. This technique is old-hat by now, but I would caution producers and editors who apply it that it’s sometimes possible to make the edits too fast. In this show, some of the cutting between images is so fast, and the glimpses of what they are trying to show you are so brief, that they’re useless.