Media Should Point Finger At Itself When Explaining Trump's Rise 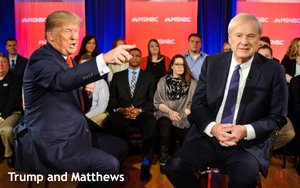 The media loves to pin the “blame” for the ascendancy of Donald Trump on issues related to the government, but the media ought to point the finger at itself too.

For many in the portion of the electorate that has lined up behind Trump, the “media” and government are now one and the same -- two big institutions whose members are full of themselves, and to some degree, also in cahoots.

Just think back for a moment to that unseemly White House Correspondents Dinner a few weeks ago. This event, which has apparently been around since 1914, was once a relatively private affair in which members of the press corps got to rub elbows with the government officials they covered in an off-the-record kind of atmosphere.

Today, it’s an occasion for public preening as journalists, celebrities and government types exchange air kisses around banquet tables arranged cheek by jowl in a hotel ballroom. It all gets aired on TV too. I saw coverage of this year’s dinner April 30 on C-Span, MSNBC, CNN and probably others -- complete with commentary about who was seen and even what some of them were wearing.

Most of it was like watching E! on Oscar night -- which is not meant as a compliment. Only on C-Span did I detect an appropriate hint of skepticism when its lone anchor and commentator at one point described the attendees disapprovingly as looking as if they were all “feeding from the same trough.” If he was trying to say they looked like pigs, then his point was made.

Such a public display of self-satisfied smuggery (a word I just made up) serves only to feed the impression formed by many that politicians and the journalists who cover them are cut from the same cloth. An ordinary person with perhaps a passing awareness of how journalism is supposed to work might watch the Correspondents Dinner on TV and then wonder whatever happened to the adversarial -- or at least arms-length -- relationship that is supposed is exist between journalists and their subjects.

Instead, the politicians and the Washington press corps -- along with the producers and editors who support them in the control rooms and newsrooms in New York and elsewhere -- were all on TV glad-handing and playing kissy-face.

They have come to seem like they’re members of the same exclusive club where they conspire to use one another each for their own advancement. It’s a club to which ordinary people have no access. Thus, when a candidate comes along who positions himself as an “outsider” who promises to throw out the old playbook and write a new one, people are only too happy to replace the insiders with the outsider because they feel the current powers-that-be are a bunch of do-nothings enabled by a compliant news media.

In this context, there is an irony that the people’s choice is one Donald J. Trump, a member of the 1 percent of the 1 percent whose residences are clad in onyx and marble and whose businesses include constructing luxury high rises and managing country clubs. In many ways, he’s been an insider for decades -- the self-proclaimed “friend” of scores of celebrities, politicians, fellow tycoons, athletes and New York mayors.

Despite his extreme wealth and country club lifestyle, he has somehow convinced his rank-and-file supporters that he’s an “outsider” who understands them and who they can rely upon to work hard for their benefit. Trump should be applauded for running a marketing and advertising campaign like no other.

Meanwhile, the punditry will continue to put across their theory that the support for Trump is a symbol of widespread dissatisfaction with an entrenched government “establishment.” But the news media has its own entrenched establishment, and they’re too busy bellying up to the banquet table with the people they’re covering to see that many in the electorate are sick of them too.

journalism, news, politics, tv
3 comments about "Media Should Point Finger At Itself When Explaining Trump's Rise ".
Check to receive email when comments are posted.
Read more comments >
Next story loading