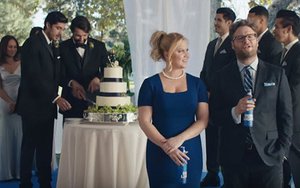 The latest TV spot in the “Bud Light Party” campaign, starring Seth Rogen and Amy Schumer, offers a strong endorsement of gay marriage along with some good-natured satire of seemingly universal wedding clichés.

The ad was broadcast in prime time on June 1 in New York and California, and debuted earlier in the day on “The Ellen DeGeneres Show”’s social channels.

The timing was chosen to mark the start of LGBT Pride Month, the one-year anniversary of the Supreme Court’s decision legalizing gay marriage across the nation, and June’s status as peak wedding season, according to parent A-B InBev.

The 30-second spot (below), from Wieden + Kennedy, shows the two comedians attending the wedding of a male couple. Rogen observes that gay weddings are just like any other wedding — a point driven home by humorous enactments of a “cringe-worthy speech” (acted by comedian Bridget Everett) and a woman going to extremes to catch the bouquet.

The brand also created rainbow-lit billboards for locations in New York and California; those are to stay up through June.

The gay-wedding theme ties into the broader brand positioning mission of the campaign, which launched at this year’s Super Bowl.

"The Bud Light Party champions inclusivity among modern beer drinkers and bringing people together — for fun — over a beer," said Alex Lambrecht, VP of Bud Light at Anheuser-Busch, in a statement, adding: “We created this spot because equality for all Americans is a concept that unites many Bud Light drinkers."

Bud Light is the top-selling U.S. beer brand, but its sales volume has declined 12% since InBev acquired Anheuser-Busch in 2008, reported MarketWatch. The company reported that Bud Light’s sales to retailers saw single-digit declines in 2015 and this year’s first quarter.