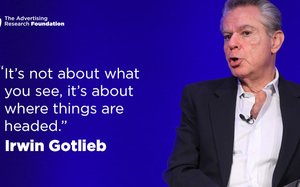 Gotlieb, arguably the most powerful man on the buy-side of media, is long known as a champion of research, data, analytics and common sense market-based principles, and is only the third industry executive to be bestowed with the honor, named after the legending industry research and consultant known for the simple and articulate ways in which he tamed the growing complexity of media research, planning and buying principles in the phase of a hyper-fragmenting media marketplace.

Gotlieb will be honored during an awards ceremony taking palce during the ARF’s Audience Measurement Conference, June 12-14 in New York City.

The award is bestowed each year to an industry executive who: