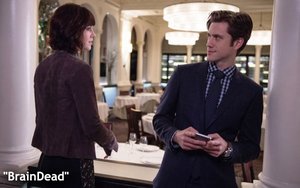 CBS is billing its new political series “BrainDead” as a “comic thriller,” but the first two episodes are neither comic nor thrilling.

This is a summer scripted series premiering Monday (June 13) from the co-creators of “The Good Wife,” Robert and Michelle King.

It is supposed to be a satire (I think) of “brain-dead” Washington. The show's thesis seems to be that everyone in the Washington power structure is nuts -- which is not exactly a point of view we have not heard before.

To drive the point home (with a proverbial sledgehammer), the episodes have long titles such as the title of Episode One, which is: “The Insanity Principle: How Extremism in Politics is Threatening Democracy in the 21st Century.” The episode itself does little, if anything, to support this title's claim.

Instead, the show introduces a plague from outer space to “explain” the “insane” behavior of Washington politicos. Originating in a meteor that landed in Russia and then ended up in a laboratory at the Smithsonian Institution, this “plague” takes the form of ant-like creatures that slip into their victims’ brains via the ear canal.

These victims emerge from this experience with their personalities altered so that they all feel happy all the time. They then conspire to infect all those who are not yet infected. Sound familiar? Yes, it does. You might even want to re-title this show “Invasion of the Ant-like Body Snatchers on the Potomac.”

How dysfunctional is the federal government in “BrainDead”? Well, this whole ant plague starts when the outer-space insects escape from the Smithsonian during a government shutdown caused by a budget deadlock between Republicans and Democrats in the Senate. Basically, when the government shuts down, the Smithsonian staffers all abruptly leave the lab, and in so doing, neglect to close and secure the crate the meteor came in.

I know -- sounds interesting on paper, right? In actual execution, though, not so much. At the center of the “BrainDead” story line is a young woman named Laurel (played by Mary Elizabeth Winstead, seen in the photo above), an idealistic filmmaker who is unable to earn a living making documentaries. So she takes a job in the Washington office of her brother, who is a powerful democratic senator (Danny Pino).

She soon finds herself at the center of the Senate’s wrangling over the budget, while also stumbling upon evidence that something strange is taking over the minds of everyone she meets -- from constituents to Senate staffers.

The problem with “BrainDead” -- at least in the first two episodes I watched -- is that the show's setting doesn't seem to resemble the real Washington at all, despite all the exterior shots of the Capitol dome.

At times, the show seems desperate to appear current. In scene after scene, clips play on TV screens in the background of Hillary Clinton or Donald Trump making campaign speeches, some of them relatively recent. This is supposed to establish “BrainDead” as timely -- connecting its fictional proceedings with the “reality” of the current campaign season. But the gambit doesn't really work.

Moreover, you get the feeling time after time that the show favors the Democratic point of view over the Republican. Big surprise, right? Yes, the writers of the show are blaming the government shutdown, and the resultant (but temporary) unemployment of thousands of government employees, on the Democrats in the show. Yet you can't help thinking that, somehow, the Republicans are to blame for maneuvering the Democrats into causing the shutdown.

It doesn't help that when we first meet the show's principal Republican senator (played by Tony Shalhoub), he's lying on his back on an office sofa awaiting the arrival of a masseuse. He is later described pejoratively by someone else as “a drunk” and “southern.” How do you like that, southern CBS affiliates?