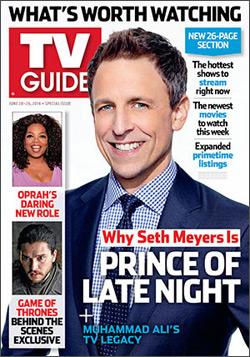 TV Guide is revamping the look and content of its magazine, beginning with its June 20 issue featuring a cover story about "Late Night with Seth Meyers" host Seth Meyers.

On stands June 16, the magazine issue will be “updated and streamlined” to reflect the “increasing need for guidance on what’s worth watching,” per the company.

“TV Guide Magazine has refreshed itself to serve as the ultimate resource for TV enthusiasts looking for in-depth and behind-the-scenes coverage of the best programming available,” stated Paul Turcotte, president of TV Guide Magazine.

He added that the magazine now “provides a platform to discuss, dissect, distill and determine what is worth viewers’ time" in one "intuitively designed package.”

The first issue of the revamped magazine features new sections and an increase in exclusive content, such as a guest column by host of “The O’Reilly Factor” on Fox News Channel, Bill O’Reilly, on why history is making a pop-culture comeback.

Upcoming guest contributors include Seth Meyers, Chris Wallace and Chris Matthews, who will guide viewers through this summer’s Democratic and Republican conventions.

A new “Out & About” page will highlight TV Guide Magazine parties and panels and “Ask Matt” will return, in which senior critic Matt Roush answers readers’ TV questions.

“Producer’s Spotlight” will profile some of television’s top talents, such as “The Good Wife’s” Robert and Michelle King, who dish on their next project “Brain Dead.”

The “Meet the Crew” section will introduce readers to TV’s behind the scenes artisans and the “What’s Worth Watching” section will curate the best content available now, organized by weekly prime-time highlights, daytime, late night, sports, streaming and newly available movies-on-TV.