A TV Star Runs For President: Our Year Of Living Trumpily 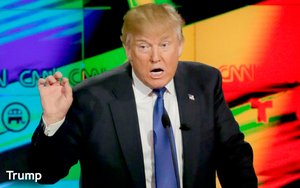 It's hard to believe that it’s only been a year since Donald Trump announced his candidacy for president on June 16, 2015 -- plunging the nation into the throes of Trump fever.

A TV star for president? Only in America, as Don King might say. But should we really be surprised?

The surprising answer: Yes, we should be -- because elevating a TV personality to the highest office in the land makes no sense, especially when many voters are judging this person’s fitness for office based on the skills and abilities he exhibited on his TV show. Earth to the electorate: TV shows are not “real” -- not even “reality” ones.

Who’s next in TV’s cavalcade of potential candidates for high office? How about Alex Trebek? He knows the answers to everything! Or maybe Jeff Probst. Imagine what would happen if he adapted the leadership skills he’s honed on “Survivor,” presiding over those intense tribal councils, to managing the executive branch of the United States government.

I’m kidding, of course -- just in case some Trump supporter reading this is now tempted to post a Tweet to Donald Trump suggesting Jeff Probst as his running mate.

How far-out is this notion of a reality TV star running for president? Maybe it was inevitable that it would happen some time since we’ve already had a movie actor -- Ronald Reagan -- elected twice as president, and a movie star -- Arnold Schwarzenegger -- elected to two terms as governor of California (as was Reagan).

And there have been other actors turned-politicians -- including George Murphy, who served as a U.S. Senator from California; Fred Thompson, elected senator from Tennessee; and Fred Grandy, four-term congressman from Iowa. Grandy’s role as ship’s purser Burl “Gopher” Smith on “The Love Boat” catapulted him to the U.S. House of Representatives starting in 1987, and deservedly so.

A handful of reality TV stars have already dipped their toes into the political waters. Clay Aiken, runner-up in the second season of “American Idol,” ran for Congress in North Carolina in 2014 and lost. Ohioan Surya Yalamanchili was fired by Donald Trump during the sixth season of “The Apprentice” in 2007, and ran for Congress in 2010. He lost too.

“Reality TV shares a lot in common with politics,” Yalamanchili said at the time. “It’s more focused on ‘gotcha’ … as opposed to substantively talking about issues.” Right you are, Surya.

Over the past year, no reality-TV star has brought the reality home like Donald J. Trump. His campaign began with his condemnation of Mexicans and a year later, well, he’s pretty much doing the same thing -- only he has added the Chinese, Muslims and half the nation’s journalists to his hit list.

It’s been a year of bullying, scowling, face-making, shoulder-shrugging, arm-waving, hand-gesturing and name-calling as The Donald starred in a series of Republican debates, appeared on countless talk shows either in person or as a disembodied voice on the telephone, was disavowed by NBC and then, a few months later, was invited back to guest-host “Saturday Night Live.”

His comedic, musical and dancing exploits on “SNL” last fall made for an episode that was among the worst “SNLs” seen in a long time, and that’s saying a lot.

For a year, Trump conducted hundreds of interviews and uttered thousands of statements in which he said mean things about people -- from his Republican opponents to Megyn Kelly -- and made preposterous promises about the things he will do as president without ever really explaining how he will accomplish any of them.

In the process, his apparent shrewdness amazed us all because these behaviors only served to make him more popular as he emerged from the primaries as the presumptive Republican nominee going into next month’s GOP convention in Cleveland.

And so, Year 2 of the Trump campaign for president begins. What will we be saying about him on June 16, 2017? By then, he’ll either be an apprentice in the White House, or perhaps back on NBC hosting “The Apprentice,” making America great again, always.

politics, tv
4 comments about "A TV Star Runs For President: Our Year Of Living Trumpily".
Check to receive email when comments are posted.
Read more comments >
Next story loading