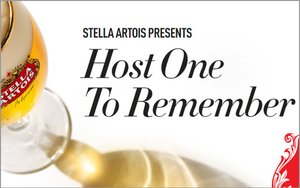 Stella Artois has recruited “iconic hosts” and partnered with Cinematique, OpenTable and Amazon, for events and offers featured during its summer-long “Host One to Remember” campaign.

The concept: to inspire consumers to host memorable events by celebrating “unforgettable and timeless toasting moments.”

Over the summer months, Stella Artois’s airstream fleet will make appearances at major food, film and art festivals across the country. Attendees will get chances to take home Stella Artois Chalices.

The brand will close out the summer with a “Le Savoir” “multi-sensorial culinary” event held in New York (Aug. 17 - 22) and in Montreal and Buenos Aires. The event’s creators include  Bompas & Parr and 45 Degrees, the global events company from Cirque De Soleil.

Summer partnerships include one in which OpenTable members who reserve dinners at participating restaurants in nine major cities will receive surprises during their meals, such as the Stella Artois Chalice.

Through a series of videos ontouchable digital video platformCinematique, consumers will be able to tap to explore, share and buy whatever they see, to incorporate Stella Artois into their celebratory moments.

In addition, the chalices are being sold on Amazon, as singles or in two-, four- or six-packs – and the brand says it will be the first beer advertised on Amazon Prime Now, to enable fans to stock up online.