Advertisers should require their agencies to disclose “all potential conflicts of interest” and comply with thorough audits covering the agency, its parent company, affiliates and subsidiaries to ensure full transparency. That’s the core recommendation made as part of a series of “Guidelines for Achieving Media Transparency,” released today by the Association of National Advertisers.

The full report, which can be downloaded here, also calls for the creation of a new chief media officer role inside big marketing organizations to oversee and ensure full transparency from its agencies and the media supply chain.

The recommendations, which are part of a new report -- “Media Transparency: Prescriptions, Principles and Processes for Marketers” -- conducted by Ebiquity’s FirmDecisions subsidiary for the ANA, includes a detailed contract “template” for agencies.

The report comes a month after the ANA released a controversial reported conducted by K2 Intelligence, which found non-transparent business practices, including cash rebates to media agencies, to be pervasive in a sample of sources representing the “U.S. media ad-buying ecosystem.”

In particular, the K2 report found evidence that agencies routinely act as the principle, purchasing media on their own behalf and reselling it to their clients after a “markup.”

“The purpose of these guidelines is to provide marketers with prescriptions for addressing transparency issues specific to the K2 Intelligence study,” ANA President-CEO Bob Liodice said in a statement issued with the new guidelines. “We outlined actions marketers should consider to diminish or eliminate non-transparent and non-disclosed agency activities and to ensure that their media management processes are optimized.”

The contract template being issued along with the guidelines was first created by the Incorporated Society of British Advertisers and was adapted for the U.S. marketplace by ANA general counsel ReedSmith LLP. It includes provisions such as a requirement that revenue earned by the media agency and agency-related parties should solely be the fees and commissions set out in the contract, unless otherwise expressly agreed upon by the advertiser. All financial and other benefits should be returned to the advertiser unless expressly agreed otherwise by the advertiser, the template stipulates.

The strategic recommendations are:

"It's a top priority of the 4A's to review this report thoroughly as it could affect many of our member agencies," 4As President-CEO Nancy Hill said in a statement responding to the ANA report.

"We plan to share specific steps and insights in the near term. As we stated in an earlier letter, we will propose sitting down with the ANA to explore common ground and try to address important questions and concerns regarding media buying practices for both agencies and marketers." 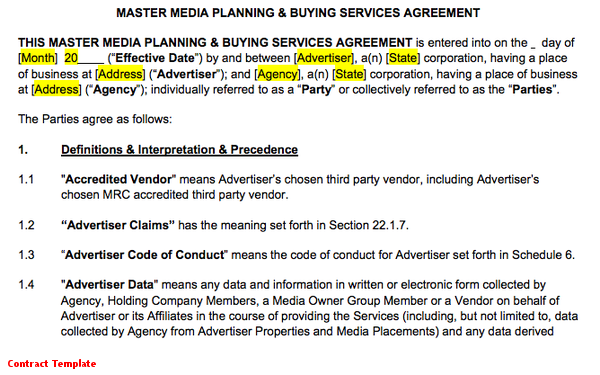