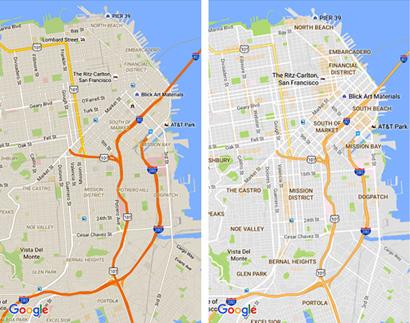 Looking for a hotspot? Google Maps now highlights the service in a Web and app redesign that emphasizes key information and areas of interest at a glance.

Information from nearby searches is not much help if the person querying the question cannot clearly read the map or determine the distance or direction. So Google has made some updates such as removing elements that are not absolutely required like road outlines. The company also improved the typography of street names, points of interest, and transit stations to make them more distinguishable from other things on the map.

The search results has a visual focus by highlighting in different colors an individual's surroundings such as freeways, highways, parks and water.

"The new Maps has a subtle color scheme to help you easily differentiate between man-made or natural features, and quickly identify places like hospitals, schools or highways. In case you’re curious, here’s a key showing what each color on the map represents," per Google.

Earlier this week, the media news site Android Police reported Google began rolling out notifications for mass transit delays and an option to restrict data use to Wi-Fi only.

Google makes about a million updates to maps worldwide daily, but it's not enough to keep up with the pace of change. So the company said earlier this week it would allow others to help it keep up by expanding the ability to add missing places and edit existing business or landmark information worldwide on both the Google Maps app for Android and iOS, and through Google Search.

It allows people to contribute information to Google Maps from more places — whether searching for a new restaurant on Google.com or looking for a nearby convenience store while on the go.

Along with that change, Google has introduced a new way to approve edits suggested by others. For places that have pending suggestions, business owners will see a notification stating that "Someone suggested new info."

Click on the notification to have the option to verify the suggestion. When enough votes are received to determine the accuracy of the suggestion, it’s published to the map. This feature is available to Android users on the Google Maps app and both Android and iOS users on mobile Google search.