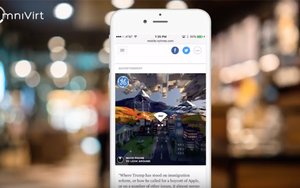 It is the latest push in the company’s strategy to combat declining print circulation and advertising revenue by investing in new formats like virtual reality.

The first execution of the VR video experience is with content created by T Brand Studio, the brand marketing unit of The New York Times, for GE.

The video was originally created for the NYTVR app, which launched in fall 2015 and was the company’s most successful app launch.

Now, the video is being redistributed natively in the Times' Web properties using technology from OmniVirt, a 360-degree virtual reality advertising platform.

OmniVirt’s technology allows the Times' audience to experience the 360-degree video without a dedicated app, platform or device. Audience can access the content directly in the publisher’s own platforms - like desktop, mobile web, mobile app and tablet - inside an article.

“This provides NYT with a premium ad format they are able to sell at a premium CPM,” Michael Rucker, cofounder and COO of OmniVirt, told Publishers Daily. “Instead of standard display, NYT is able to take the same inventory and run this VR/360-degree format.”

Rucker said brands are “all in” on virtual reality right now, but the biggest challenge has been how to distribute VR content. “NYT is now able to offer distribution to these brand partners and bring in more advertising revenue as a result.”

At the end of this particular execution, there is also a “Watch More” click to action that takes users to a GE-sponsored post on the Times’ site.

According to a blog post on OmniVirt’s Web site, putting the VR video natively into The New York Times mobile site helped “dramatically improve discovery of this content.”

This week, The New York Times Co. announced that its digital ad revenues fell in the second quarter of the year, marking two consecutive quarters of year-over-year declines.

NYTCO reported that total digital ad revenues sank 6.8% to $45 million in the second quarter. The digital decline added to significant print losses, down 14.1%, for a total ad revenue decline of 11.7%, to $131.2 million.

President and CEO Mark Thompson said the drop in digital ad revenues is attributed to a dip in traditional Web display advertising, which cancelled out growth in newer digital advertising categories like mobile and video.

In May, during the Digital Content NewFronts, the Times doubled down on its commitment to virtual reality as a new revenue opportunity. The company announced six new digital video series and talked up its push into 360-degree videos.

Rucker told PD that other top publishers are facing the same challenge as the Times. He said OmniVirt is working with Vice and AOL, which recently acquired RYOT studios, to produce 360-degree and virtual reality content, to expand distribution across their properties.
mobile, newspapers, online video, virtual reality
Next story loading