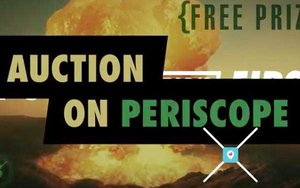 Participants in the event, dubbed “THUMP By Wingstop,” bid on prizes by tapping the Periscope heart button.

The fan who had thumped the most hearts at the end of each auction won the designated prize.

Prizes ranged from a beach cruiser bike and custom Nike shoes, to a “Choose Your Own VIP Experience” worth up to $1,500 (the winner received two $250 concert vouchers and a $1,000 travel voucher to be used toward any concert in any city they choose).

In its U.S. locations, the chain also offered five free wings with any wing purchase between 11 am and 2 pm on Wing Day.

“We were the first company to offer a dynamic social ordering platform on Twitter and Facebook Messenger, and we continued to innovate with this first live auction series on Periscope,” said Wingstop CMO Flynn Dekker.