After Ailes, The Show Goes On At Fox News Channel 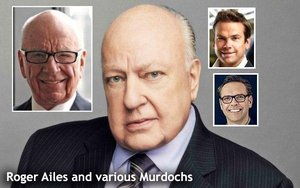 Fox News Channel is a great TV network. And the company of which it is a part is a great company to work for.

There, I said it. Feel free to fire away at me. That’s what tends to happen when you come out in defense of Fox News. Everyone you know thinks you’re crazy. And people you don’t know -- readers of your TV columns and blogs, for example -- will leave comments or write you angry emails about the treachery of the Murdoch/Fox axis of evil.

I will admit that the news about Roger Ailes is certainly worrisome. (I know -- the word “worrisome” is an understatement, but I can't quite find the right word here.) His (alleged) behavior is also mystifying and surprising. At a certain point in my career, I was acquainted with Roger Ailes, and I always liked him. So shoot me (or better still, just write me an angry message).

Suddenly, he's looking like the Bill Cosby of TV network executives. From here on, though, he will be the central figure of this drama at some distance away from Fox News Channel, now that the parent company, 21st Century Fox, has jettisoned him (I know, got him to “resign,” with a very golden parachute, reportedly).

From the reports that came out while much of our attention was focused on the two consecutive weeks of political conventions, I guess we’re supposed to assume the “investigation” the company undertook following Gretchen Carlson’s lawsuit revealed patterns of behavior that, to the powers that be, justified severing its relationship with the man who founded the Fox News Channel and turned it into a multibillion-dollar asset for the company.

It's also likely that the younger Murdochs -- Lachlan and James (seen at right, top and bottom, respectively, in the photo above) -- were looking for a reason they could use to get their father, Rupert Murdoch (left inset in the photo), to finally let them remove Ailes, with whom they reportedly clashed.

And so the younger generation moved in for the kill, although Rupert installed himself in the top job at FNC, at least until the company names someone else.

On this subject, the columnists and pundits have had a field day surmising that without Roger Ailes, Fox News Channel is doomed. That's poppycock, of course. The network happens to be a well-oiled machine with many moving parts.

Sure, a dynamic figure like Ailes at the top probably helped keep it all running smoothly, but the man did have capable underlings. The only question about them that remains now is not their talent for putting on Fox News-style newscasts and talk shows that score high ratings, but whether any of them will get caught up in the sexist culture that everyone is now alleging has taken root there.

Meanwhile, my instinctual defense of Fox News is the same one I used to apply when defending The New York Post, where I worked for a number of years (before News Corp. moved to separate its print publishing and movie and TV companies into two different entities).

Defending The Post came with the territory. Friends and enemies alike were always complaining about, or asking me to explain, this or that outrage or perceived bias.

And my answer was always the same: Pound for pound, The Post’s editors, reporters and columnists were doing the same work every day that their counterparts at the Times and Daily News were doing -- reporting on everything from politics, police and courts to sports, entertainment and restaurants -- and then wrapping it all up by evening in time to get it printed and distributed.

I would insist always that The Post’s staff was energetic, hard-working, highly intelligent and (here’s where people would roll their eyes) highly ethical. From first-hand experience, I believed it then and I believe it now.

As for Fox News Channel, the people I have known there are a great group -- highly competitive, professional and committed to excellence, just like their counterparts at CNN and NBC (MSNBC). They happen to put on excellent TV shows whose popularity won’t wane with the Fox News audience just because Roger Ailes has left the building.

news, tv
2 comments about "After Ailes, The Show Goes On At Fox News Channel".
Check to receive email when comments are posted.
Read more comments >
Next story loading