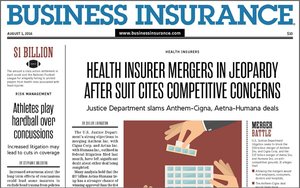 Crain Communications is ending its Business Insurance brand after nearly 50 years in operation. The company said this decision will “allow for increased focus on products with higher growth potential.”

“As a result of shifts in the insurance industry, including continual structural changes and consolidation since 2008, Business Insurance has struggled to diversify its revenue from a dependence on a declining base of print advertising,” the company stated.

Though Crain Communications “invested heavily” in a new team to try to boost Business Insurance’s success, it wasn’t enough. “It became clear that the changes in the market simply weren't going to be reversed,” the statement continued.

According to Insurance Journal, Business Insurance editor Gavin Souter said in an email that “consolidation in the insurance industry” was mostly to blame for the magazine’s demise.

“On the editorial side of the house, it’s given us plenty of stories to write, but it has also meant that many of our advertisers have been absorbed by other companies,” he wrote.

KC Crain, EVP and director of operations for Crain Communications, said the company will continue to actively invest in brands that provide a good media mix in "markets with proven growth potential.”

Crain has about 900 employees worldwide and reported revenue of $229 million last year.