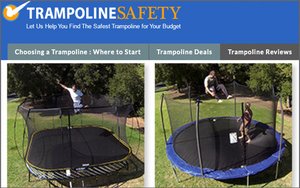 An ad watchdog has told trampoline company JumpSport to revamp a Web site that appears to host reviews and other editorial content, but actually contains ads for its own products.

"It is very important that consumers know who created the content and the reason it was created as such information may shape the prism through which consumers view the content," the National Advertising Division, a watchdog administered by the Better Business Bureau, wrote in a decision unveiled this week.

The site, TrampolineSafety.com, appeared to offer consumer reviews, ratings and assessments of safety and performance for various trampolines, according to the NAD.

JumpSport's own trampolines were the highest-rated ones listed on TrampolineSafety.com, according to the NAD. The site also boasted that JumpSport offers "The World’s Safest Trampolines,” and that its products are "Consumer rated number one for safety, performance & play value.”

But all of the material, including the reviews and ratings, was created by JumpSport itself. "The images, words, and seemingly objective layout of the Review Website convey an air of independence that simply does not exist," the NAD wrote in a decision unveiled this week.

The self-regulatory group adds that the site's format "is inherently misleading to consumers."

The site reveals in fine print at the bottom of the page that it is owned by JumpSport, and that the product ratings were compiled by JumpSport. But the NAD said that disclaimer isn't adequate.

"Disclosures cannot contradict the main message of the advertisement (i.e., that the listed trampolines have been tested and rated by independent experts)," the NAD wrote. "Moreover, even if a disclosure could cure this false impression, the advertiser’s disclosures were not clear and conspicuous."

The site came to the NAD's attention as the result of a challenge by rival company Vuly Trampolines.

Vuly also challenged claims about itself on JumpSport's site, including that its trampoline rates "low in ease of installation" and is more expensive to ship due to its "heavier springs."

The NAD told JumpSport that the company didn't have "a reasonable basis for its review and ratings claims about its own or competing trampolines, including Vuly’s."

Mark Publicover, CEO of JumpSport, says the company disagrees with the decision but plans to comply with it.

"We use very objective test methodologies," he tells MediaPost. "We think our test results are very valid."

Publicover says TrampolineSafety.com, which has been online since 2007, has already removed some of the ratings it gave to competitors, and plans further revisions. "We want to try to do things that are at the highest standards, so if we have to do more de-editorializing of the site that's what we're going to do," he says.

The company will "be making it crystal clear, if it wasn't already crystal clear to people, that it's a JumpSport site," he adds.