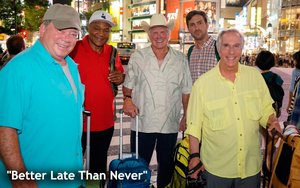 Not that this should necessarily present a barrier to enjoyment, but much of this new four-week NBC series called “Better Late Than Never” doesn’t ring true.

For openers, there’s the idea that its four aging protagonists -- William Shatner, 85, Henry Winkler, 70, Terry Bradshaw and George Foreman (both 67) -- are real-life buddies. While watching the premiere episode of this show the other day, I was not persuaded that these four knew each other previously, much less ever hung out together, despite this show’s attempts to convince me otherwise.

I was also unconvinced that the four would purposely and “by surprise” be served something as exotic as “pig vaginas” (as the show identifies them) in a neighborhood restaurant in Tokyo without this particular culinary selection being set up by producers in advance for their entertainment value.

I am sure the producers of “Better Late Than Never” (including Winkler, who is listed as executive producer) realized that American audiences would be shocked that such a thing would be served in a restaurant in Asia. (Here in New York, though, we’re not so shocked. These porcine parts are displayed in the windows of Chinatown butcher shops identified as “pork uterus” with signs written in both English and Chinese.)

But this is the kind of culture-clash material you will get if you watch “Better Late Than Never,” which is positioned by NBC as a kind of reality-sitcom hybrid. More than either of those, however, it is a travelogue in which four so-called celebrity pals play themselves as they barnstorm on a late-in-life adventure through six cities in four Asian countries.

The one-hour premiere -- airing Tuesday night (Aug. 23) -- takes the foursome to Tokyo, along with a sidekick named Jeff Dye. He’s a 33-year-old comedian who is on hand to (1) make sure this show has at least one person who falls within the 18-49 demo and (2) act as a “minder” for these old codgers who, the show seems to suggest, would wander off and get in all sorts of trouble if not for him.

Among other things, Jeff gets his pals booked into one of those “capsule” hotels in Tokyo. These lodgings -- supposedly designed for Japanese businessmen to sleep off a night of binge-drinking without having to go home and confront their wives (according to the show) -- have provided endless fodder for TV travel shows and magazine and newspaper feature stories because they are so unusual

Here again, one wonders if these four American celebrities really stayed in this “hotel” in which each person sleeps in a compartment the size of a single bed. We see them there, of course, but you also get the sneaking suspicion that after the cameras stopped rolling, they went to their real hotel.

Not surprisingly, the four men plus their young companion wander around Tokyo with wide eyes and slackened jaws because (1) it’s quite a place and (2) that’s what these real-life “characters” are expected to do in a reality-sitcom that NBC’s press materials describe as a “fish-out-of-water” comedy. Hey, looky there, they say at various points as they discover fascinating facts about Japanese culture.

In an attempt to educate the viewer, they note that beer is so popular that it is sold in vending machines throughout Tokyo -- something the Ramones sang about in 1981. The relevant lyrics: “We came across a miracle, there was beer in the soda machine!” (College memory alert: We had cans of beer available for purchase in the soda machine in our frat, which was a great convenience.)

Whether they actually know each other or not, there are worse foursomes with whom a viewer could tag along on a multi-country jaunt through Asia. Certainly their status as celebrities helps smooth their way. The show’s two TV stars -- Winkler (aka Fonzie) and Shatner (alias Capt. Kirk) -- are particularly well-known in Japan. And Shatner is a fascinating force of nature all by himself. At age 85, the man seems to have the energy of a man 25 years younger.

The real mystery of this show is the question of how it came to be. In a TV world in which 50 years old is over the hill, what’s this bucket-list, “Golden Guys” comedy-reality show doing on NBC? One answer might be: It is signaling that the dog days of August have arrived.