Preparing For Our Augmented Reality Future 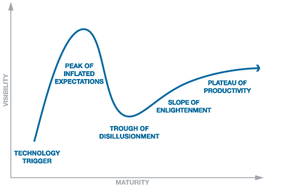 There are many factors to consider in trying to predict when an emerging technology might have its iPhone moment, breaking through from an early-adopter niche into a mainstream consumer product. Merely being technically possible is only one piece of the puzzle, and in many ways is the least important. Once something is feasible, the next gating factor is market economics -- can we manufacture or productize it at a price that anyone would pay? But beyond technical and economic feasibility, there’s a third factor that’s often overlooked: cultural feasibility -- are we collectively “ready” for the technology.

Technology is at a point where it’s inseparable from our culture. Even minor developments, like tweaks to Facebook’s feed algorithm, can cause major changes in human behavior, and upset entire industries overnight. So it makes sense that larger shifts require some time to adapt. Along with technical advancement, it’s this cultural adjustment that’s taking place during the “trough” period of the hype cycle: a technology is known, but not yet ready for primetime. Only when both the technology and culture are both ready can it become a part of our daily lives.

One of the most likely candidates for our next platform shift is augmented reality, the intermingling of digital objects and data onto a view of the real world. The future version of this will see us wearing normal-looking glasses or contacts, seamlessly adding digital context to what we’re seeing in the physical world. It will be a significant change to our everyday lives, providing nonstop media time whenever we’re awake. While it will take years to be that seamless, the first headsets -- from Microsoft, Meta, and Magic Leap -- are beginning to come to market. But those will be niche products for the time being, the Blackberries ahead of the iPhone.

The larger cultural groundwork is being laid by two much more mainstream use cases— Pokémon Go and Snapchat lenses. As we’re capturing pocket monsters and turning ourselves into puppies, we’re also building daily habits and forming social customs around mixing the digital with the physical. And, for the first time, hundreds of millions of us are playing in this space. It’s this play which will prepare us for a future where digital pets hide in our closets, glancing across the room highlights your best Tinder match, and media is ever-present in the corner of your eye.

Venture capitalist Chris Dixon stated that “the next big thing will start out looking like a toy.” Right now, I see an awful lot of augmented reality toys, socializing us ahead of the next big platform shift.
2 comments about "Preparing For Our Augmented Reality Future".
Check to receive email when comments are posted.
Read more comments >
Next story loading