On Wings Of LeBron, Cleveland Angel Investors Take Up Residence At CNBC 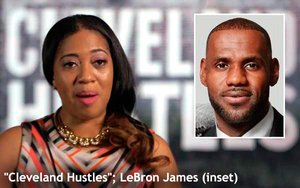 LeBron James puts in an appearance at the beginning of the premiere episode of “Cleveland Hustles” on CNBC, and then disappears, never to be seen again.

He is listed as an executive producer of the show (along with Maverick Carter, identified by CNBC as his business partner). In the introductory segment in which James is seen, the NBA star is positioned as the “inspiration” for this show’s stories about Cleveland entrepreneurs who wish to interest a group of angel investors in their dreams of growing their small businesses into big ones.

The idea is that their success will not only help them, but will also help the city at large recover from decades of economic woes, one storefront at a time.

James, 31, was raised in Akron (about 40 miles south of Cleveland) and led the Cleveland Cavaliers to the NBA championship in June -- something he more or less promised the city he would do after he returned to the Cavs from Miami.

Although he is mainly absent from the actual action in “Cleveland Hustles,” you are meant to assume that the investors on hand – plus the show’s “host,” an entrepreneur and “mentor” figure named Bonin Bough -- are operating as his surrogates, although they are putting their money on the line, not his.

“Cleveland Hustles” is another in a growing group of angel-investor shows that seem to be working for CNBC. With business as their theme, they are compatible with CNBC’s all-day focus on business news.

The prime-time hours have traditionally been somewhat of a puzzle for CNBC, but in recent years, the network seems to have found stability with these angel-investor/business-mentor shows such as “Shark Tank” (repurposed from ABC), “West Texas Investors Club,” “The Profit” and others. (Also working for CNBC prime time, apparently: “Jay Leno’s Garage” and the documentary series “American Greed” about Ponzi schemes and other financial scams.)

In “Cleveland Hustles,” the angel-investors group hears pitches from a number of entrepreneurs and narrows them down to two who then compete for the attention (and money) of one of the investors. In the premiere episode airing Wednesday night (Aug. 24), two men, Dan Herbst and Geoff Hardman, who have been gaining a following for their artisanal bagels, are pitted against a woman, Chareen Fountain, who seeks to start a hairstyling business. Her plan is to lease chair space to other hairstylists under the same roof and profit from their rent.

In the show, the competing entrepreneurs are given 48 hours to open a “pop-up” store and then meet sales goals that the angel investor sets for them. In between, mentor Bonin Bough and the investors show up from time to time to look over the entrepreneurs’ progress. Then Bonin faces the camera and lectures the viewing audience about what these entrepreneurs need to do in order to succeed.

The mentors and investors on this show have a habit of overemphasizing the word “brand.” They make it seem as if defining one’s brand is the overriding, if not only, key to success an entrepreneur has available to him or her -- more than his or her drive, ambition, energy, commitment or the original idea. In fact, the idea itself would seem to be the most important thing, wouldn’t it?

And yet these people repeat the word “brand” so often that it becomes “branded” on your brain. If nothing else, there’s a drinking game idea here if anyone feels like getting tanked while watching this show.

I imagine that for viewers who have experience in small business start-ups (or have ambitions to become involved in them), these kinds of business-mentoring shows are right up their alley. Maybe such people actually can learn a thing or two from them.

The premiere episode (and I assume future episodes too) ends with the angel investor informing the two finalists which one he has decided to fund -- essentially crushing the hopes and dreams of the one who didn’t win his support. This made for surprisingly uncomfortable viewing since both businesses performed well in the tests that were set out for them.

The truth is, if both ideas worked well, why couldn’t the show have found a way to fund both of them, particularly if the show’s aim – as articulated by LeBron James at the outset – was to help improve the storefront economy in Cleveland? After all, two successful storefronts are better than one, aren’t they?