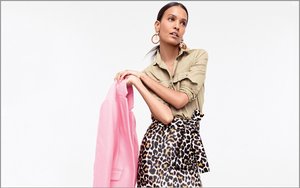 J. Crew, still struggling to regain its buzz from yesteryear, is getting a boost from Nordstrom. Nordstrom has been selling a special collection of Crew’s Madewell brand since last year and now says it will add an exclusive assortment of J. Crew’s women’s clothing in 16 of its stores.

The launch is scheduled for early next month and focuses on J. Crew classics like the Regent and Rhodes blazers, Italian cashmere, pants and outerwear. The Seattle-based Nordstrom says the line will be “merchandised and presented in the signature Crew way: pattern mixing (like prints with stripes), quirky styling and bright colors, with a fun assortment of accessories.”

Nordstrom says the Madewell collection, with its artsy denim focus, has been a hit in its stores, and it’s expanding to a total of 76 Nordstrom locations and at Nordstrom.com.

In addition to Nordstrom, J. Crew and Madewell products are only available in their own stores in the U.S., although Crew does partner with other retailers internationally.

Like most department stores these days, Nordstrom has been having a tough time of it. Although it just recently announced profits that topped expectations, its sales slipped 0.2% to $3.6 billion, and same-store sales dropped 1.2%. Second-quarter net earnings were $117 million, compared with net earnings of $211 million a year ago. The company says the Midwest was its strongest region, and that beauty and shoes were the best-selling categories.

J. Crew’s struggles, however, are more significant -- and it’s a long way away from 2009, when it was all the Obama-family-fueled rage. Recent years have seen it plagued with layoffs, bitter customer complaints about shoddy quality, and the sense that it has abandoned the chic professionals who once adored it. In its most recent quarterly results, it reported a 3% fall in sales to $567.5 million, with a 7% tumble in comparable-store sales. (That follows a drop of 8% in the same period of last year.) And while the J. Crew brand is the weak link, Madewell did well: Sales of that brand jumped 17% to $72.5 million, with a 6% improvement in same-store sales.

J. Crew is currently ranked No. 5 by Brand Keys, which measures customer loyalty -- down from No. 3 last year and No. 1 the year before that. (Victoria’s Secret holds the No. 1 spot now.) “Mall sales are down for everyone but from a brand perspective, the J. Crew price/value perception is down and that’s usually has to do with perceived quality,” Robert Passikoff, founder and president, tells Marketing Daily. “There are still brands out there doing pretty well, so we know that smarter consumers are willing to pay for smarter clothes. It’s not an it’s-the-economy problem.”

He thinks this kind of partnership may help J. Crew regain some fashion cred. “Nordstrom is at least going to treat the brand with respect, and it’s a way of putting their products in front of a younger audience in a brand-appropriate environment, filled with likely -- if not rabid -- J. Crew audiences.”