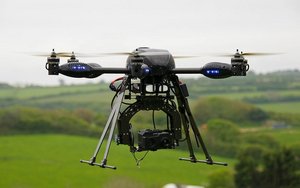 I suppose it was only a matter of time: we had social media, we had drones, so now of course we have social media drones.

Yes, social media users who are bored with Instagram filters and selfie sticks can now take things to the next level with a drone designed specifically for taking pictures to share on social media, causing all your friends to simply close their accounts in awe, and leaving you the victor of the Internet forever.

Costing a mere $499, the Yuneec “Breeze” weighs less than a pound and has a flight time of 12 minutes with a charging period of 40 minutes. Its camera produces high-definition video and photos that users can share directly to social media sites like Instagram, Facebook and Twitter through its iOS and Android apps, which also conveniently allow users to add captions and comments before posting.

The drone comes with a number of automatic flying modes to choose from, including “Pilot,” “Selfie,” “Orbit” (for dramatic revolving aerial shots), “Journey” (to follow a planned route) and “Follow Me” (with GPS tracking to record action-packed sports adventures). It’s also equipped with safety features like infrared positioning sensors to ensure that it doesn’t crash into surrounding objects or people, and an auto landing “return to home” feature.

It also contains some questionable universal assumptions about human beings: “No matter what we’re doing, we’re always documenting and sharing those experiences. It’s in our nature.” Um, but I don’t? Am I not human? Maybe not. Sigh.

The Breeze is available at Best Buy and other retailers.